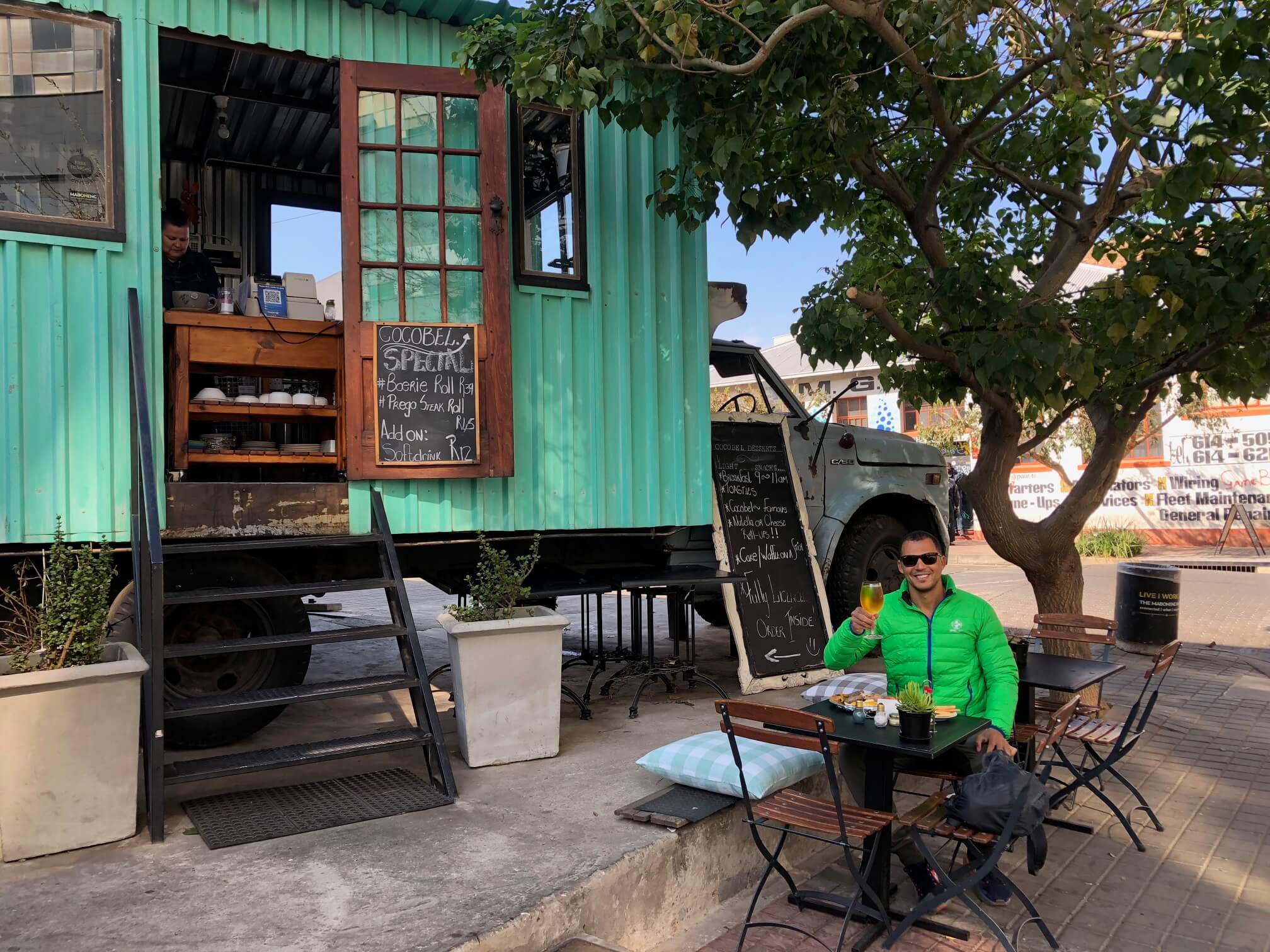 What to do on a weekend in Johannesburg? Just follow my itinerary with the best things to do in the city 😉

Johannesburg, Joburg or Jozi, is the principal gateway to South Africa and a transit point for connecting flights to Cape Town, the Kruger National Park and Durban.

But before you hop on another flight or just spend some time at OR Tambo International Airport, take the Gautrain or even better call an Uber and go exploring in one of the greatest cities in South Africa.

Johannesburg may not have a good reputation because of the high crime rates and isn’t considered to be as pretty as Cape Town. But the crime rate is now lower than that of the Western Cape and, like many other big cities in the world, there are many interesting things to do in Johannesburg.

In August of 2018, I spent a weekend in Johannesburg and loved it. Even though I had some misadventures, the attractions that I visited and the experiences I had gave me a better comprehension of South Africa’s history, made me rethink my own prejudices and also broke down some stereotypes.

If you are spending a weekend in Joburg, follow my suggested itinerary and you will see how to have an unforgettable time in the Golden City.

A Perfect Weekend in Johannesburg Itinerary

This itinerary is for a weekend (2 full days and nights). If you are planning to spend 2 days in Johannesburg that are not weekend days, you can also use it, but need to make some changes because some of the places mentioned below are only open on the weekends.

If there is a place that you must visit in Johannesburg, it’s the Apartheid Museum!

The Apartheid Museum opened in 2001 and illustrates the rise and fall of Apartheid: a former system of social segregation and politic and economic discrimination that originated in South Africa in 1948 and lasted until the early 1990s.

The collection features provocative film footage, photographs, text panels and artifacts depicting the events and human stories that are part of this unfortunate period.

I must say that a visit to the Apartheid Museum is heartbreaking! When you start seeing pictures and reading what black South Africans went through, tears will come…

You will leave it completely touched and ashamed of this chapter of humankind’s history.

After leaving the Apartheid Museum you can head to one of the best places to visit during the weekend in Johannesburg: the Neighbourgoods Market.

The Neighborhoods Market, located in the heart of the city in a 15-storey building, is open every Saturday from 9:00 AM to 3:00 PM and the first Thursday of every month from 5:00 PM until late.

On the two floors, there are plenty of things to buy, delicious artisanal food, craft beers and cocktails. So it’s the perfect place to get familiar with South African cuisine, have lunch and meet some locals.

But the best is definitely the rooftop that provides a great view of the city and also a place to soak in the sun. Around 1:00 PM there is live music and it’s when the market becomes one of the busiest places in Joburg on Saturdays.

Visiting the Neighbourgood Market it’s one of the best things to do in Johannesburg on the weekend and I’m sure you will like it.

You should leave the market around 2:30 PM and after a 5min drive, you will arrive at Constitution Hill.

This former prison and military fort is another place to learn about South Africa’s journey to democracy, so it should also be on your Weekend in Johannesburg itinerary.

A visit to Constitution Hill takes an average of two hours and I really recommend taking a guided tour. You can do the Highlights Tour from 3:00 – 4:00 PM and then spend another hour in the precinct.

You can explore the different parts of this Old Fort, including a section for male prisoners known as Number Four, a Women’s Jail, an Awaiting Trail Block and also South Africa’s highest court, the Constitutional Court.

A visit to Constitution Hill is shockingly disturbing, but at the same time, it’s a great way to understand black people’s struggle for freedom, which was quite remarkable in this country.

After leaving Constitution Hill you can go to your hotel, rest and then head to the last place to visit in the first of your 2 days in Johannesburg.

Sandton is an affluent and modern area of Johannesburg that has become the new financial district of South Africa and Johannesburg’s premier business centre.

Sandton is one of the most fashionable and safe destinations in Johannesburg, but it is not my favorite part of the city. You don’t feel like you’re in Africa anymore, as it could be anywhere in the world.

However, it’s the perfect place to see the big contrasts that the city is made of and this is the reason you should include Sandton in your itinerary for 2 days in Johannesburg.

You can go there to have dinner at Nelson Mandela Square, a very nice area with over 60 exclusive shops and boutiques and home to some of South Africa’s finest restaurants.

If you feel like going to a bar or dancing, my recommendation is The Orbit, a Jazz Club and Bistro.

You should start the second day of your Weekend in Johannesburg itinerary visiting one of the most historically important neighbourhoods in the city: Soweto.

A separate city from the late 1970s until 1994, Soweto, an acronym for South Western Townships, was originally populated mostly by native African workers from the gold mining industry.
During the apartheid era, those areas were designated as non-white areas in accordance with segregation policies.

Soweto was the epicentre of many conflicts between the government and the black community, including the 16th of June 1976 uprising that began in Soweto, spread countrywide, and culminated in the death of many students, among them the 12-year-old Hector Pietersen, who became a martyr and in whose honour a museum and a monument were created.

Nowadays Soweto is full of attractions such as the Nobel Laureate Walk, the only street in the world where two Nobel Prize winners had lived; the Nelson Mandela Museum; Orlando Towers (the most distinctive landmark in the neighbourhood); the Hector Pietersen Memorial and Museum, etc.

You can take a Soweto bike tour, as I did, a tourist bus or a private tour. Whatever you decide, you should not miss Soweto! The ideas, stereotypes and preconceptions you have of townships might change completely.

After visiting Soweto you can head to Maboneng, one of the best places to visit in Johannesburg during the weekend.

You may have never heard of Maboneng, but it was considered by Forbes in June of 2018 one of the 12 coolest neighbourhoods around the world. “A no-go zone until the end of Apartheid in 1994, Johannesburg’s Maboneng has since transformed into a lively urban area with blossoming art and culinary scenes”.

You can feel Maboneng’s vibrant and unique character on its streets, buildings, restaurants and people who come to enjoy its fine art galleries and museums, markets, lively rooftop bars and amazing parties.

You can have lunch at Market on Main, located in an early 1900s converted bonded warehouse that is only open on Sundays from 10:00 AM to 3:00 PM. This market is also part of the Arts on Main complex, which features artist studios, galleries and quirky shops.

You should explore this tiny district. There is a street market on the weekends, you can visit the Museum of African Design, which is open until 6:00 PM, and then head to Living Room Rooftop Café at The Main Change Building.

This Rooftop Bar provides a wonderful sunset view, has great DJ’s and a diverse and beautiful crowd. The party gets busy from around 3:00/4:00 pm and goes on until 7:00 PM on Sundays and is definitely one of the best things to do in Johannesburg on the weekends.

And if you think you haven’t had enough for the day, dine at Pata Pata, a restaurant that serves traditional African inspired cuisine with live entertainment, and shake your body at Shakers, a cocktail bar with good DJ’s mostly frequented by locals.

For me, this is the best way to spend a weekend in Johannesburg and if you follow this suggested itinerary I strongly believe that you will like the city as much as I did.

Safe travels and have fun in Jozi.

Don’t forget to buy travel insurance, which can literally be your lifeline if something happens to you and if your luggage is lost or stolen.

Johannesburg is located on the Highveld, a plateau region in South Africa, at an elevation of 1,750 m (5,740 ft). (Check exact location here).

Johannesburg is served principally by OR Tambo International Airport for both domestic and international flights. Lanseria Airport, located to the north-west of the city and closer to the business hub of Sandton, is used for commercial flights to Cape Town, Durban, Port Elizabeth, Botswana, and Sun City.

You can buy your ticket here with Skyscanner, which is the website that I use and trust.

The rapid rail link, Gautrain, connects the OR Tambo International Airport to the districts of Sandton, Midrand, Sandburg, and Rosebank, and central Johannesburg to Soweto, Pretoria, and most of the satellite towns along the Witwatersrand.

To move around the city the best thing is getting an Uber and I really recommend you setting up an Uber account. Another option is the Hop-On Hop-Off bus.

There is also a Hop-On Hop-Off bus from Cape Town to Johannesburg.

Johannesburg enjoys a sunny climate, with the summer months (October to April) characterized by hot days followed by afternoon thundershowers and cool evenings, and the winter months (May to September) by dry, sunny days followed by cold nights.

The best times to visit Johannesburg are from March to May and September to November. During these low season months, crowds lessen, prices drop and the weather is relatively warm and dry.

I visited Johannesburg in August and the weather was very dry and chilly at night.

If you’re looking for accommodation in Johannesburg my recommendations are: 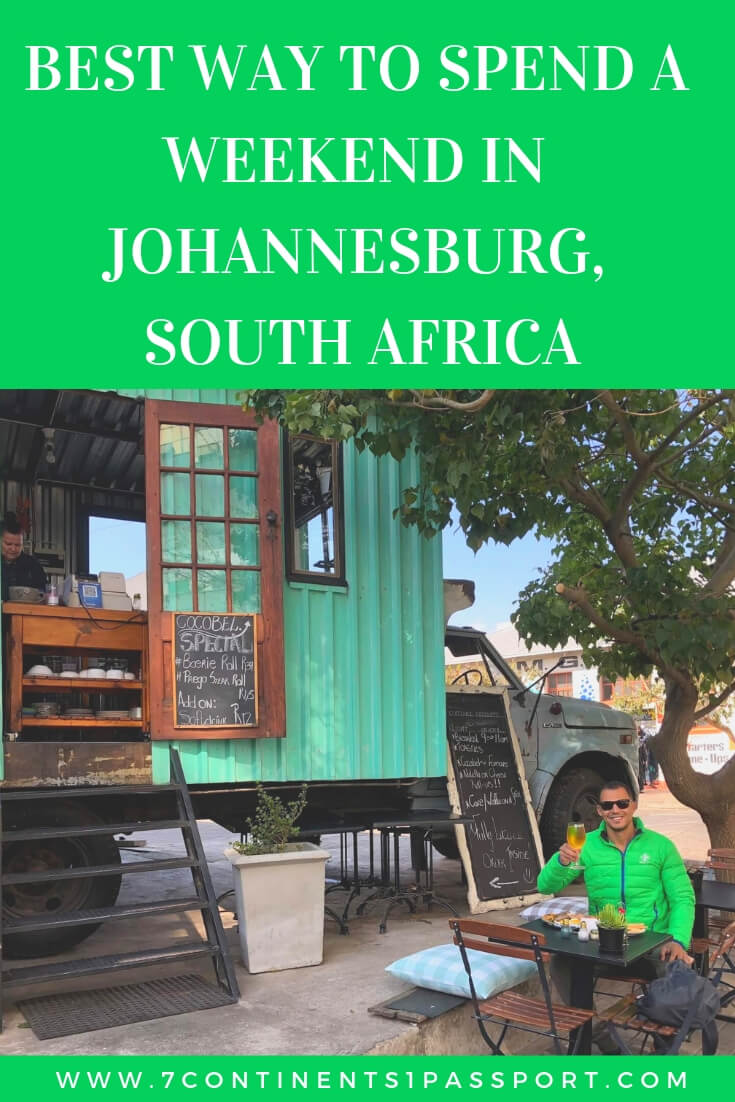 7 thoughts on “Best Way to Spend a Weekend in Johannesburg”