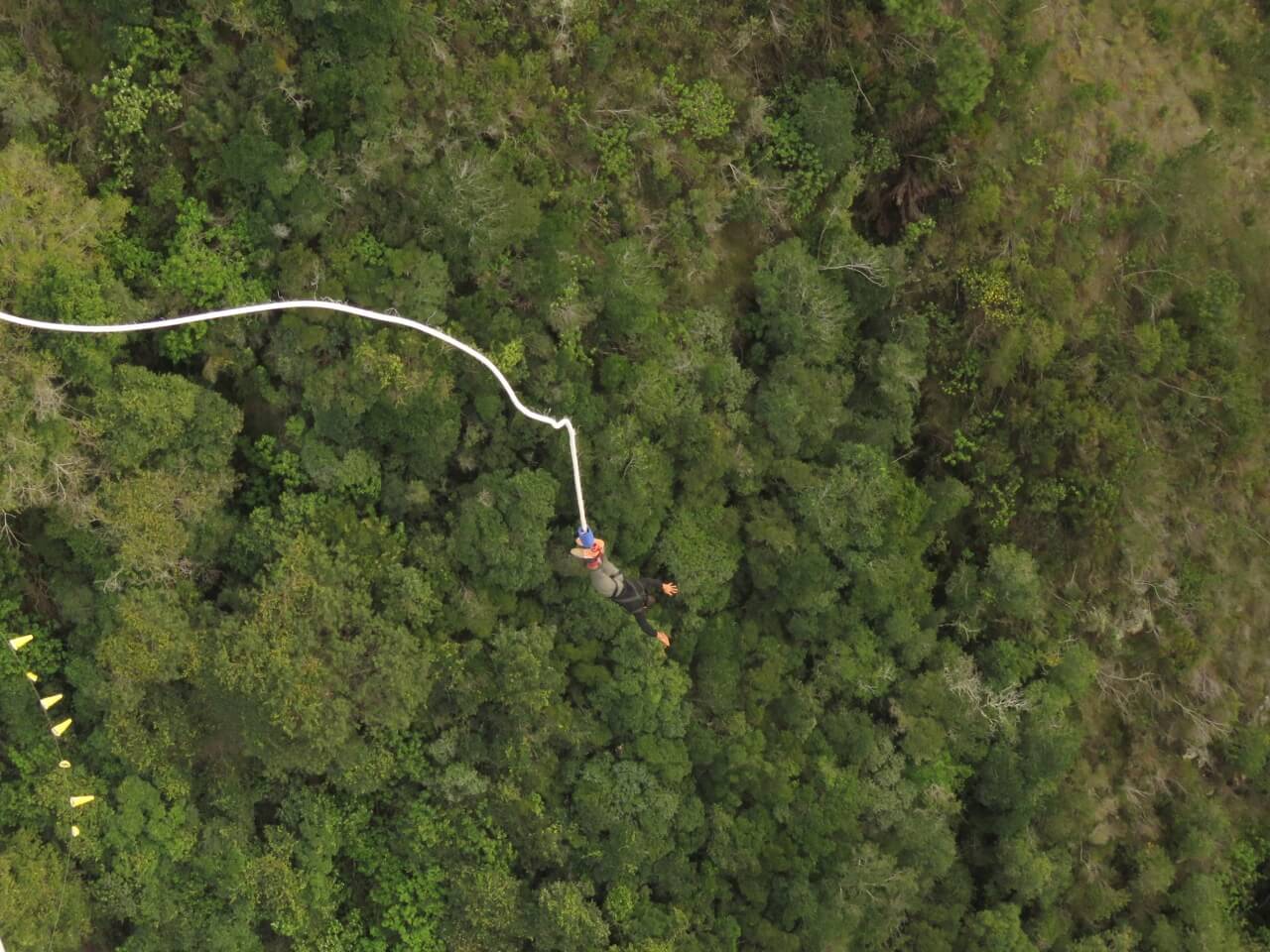 Never in my wildest dreams did I think I would bungee jump! Especially from Bloukrans Bridge, the highest commercial bridge bungee jump in the world at 216 metres (709 ft) above the Bloukrans River.

I was always so scared of bungee jumping that I promised to myself that I would never do it. But when visiting South Africa for the first time, I decided to take a 5-day trip along the Garden Route with Hot Spots 2 to C, a renowned company that I’m working with as a travel ambassador.

We would visit many beautiful places including the Tsistsikamma National Park, Storms River Mouth, Jeffrey’s Bay (a beach that I always dreamed of), etc and going kayaking, walking with elephants, zip lining, wine tasting and bungee jumping.

The itinerary seemed perfect and I was very excited to take this trip. But after they told me about the Bloukrans Bridge bungee jump, I started freaking out.

I was getting anxious, worried and uncomfortable just thinking about of it. I really thought that I would die if I jump. It might sound silly but shows how scared I was…

The Bloukrans Bridge is an arch bridge located near Nature’s Valley in the Tsitsikamma region, Western Cape, South Africa.

The Bloukrans Bridge became the first African bridge for bungee jumping in 1997 and it has been free of fatalities for over 25 years.

Furthermore, Bloukrans Bridge is recognized as the highest bungy jump from a bridge in the world and one of the most terrifying experiences in the Garden Route.

One of the reasons people decide to do the Tsitsikamma bungee jumping is the price.
It’s very cheap to bungee jump from the Bloukrans Bridge and in South Africa in general compared to other parts of the world. To have an idea:

Jumping from the Highest Bungy Bridge in the World

I was picked up at the V&A Marina Waterfront Apartments in Cape Town by the Hot Spots 2 C’s driver / guide at 6:45 AM to do the 5-day Garden Route + Addo trip.

Gerhard, a very courteous guide with a great sense of humor, started talking to me as soon as I hopped on the van.

After the first stop he asked me:

– Are you doing the Bloukrans Bridge bungee jump tomorrow?

– I will probably not.

– Because I’m so scared of dying, I answered.

– You’re not going to die Péricles. I’ve done it before and I can tell that’s one thing that you should definitely do in your life. Don’t miss this opportunity! You don’t even have to pay for your jump because it’s a courtesy from the company.

The way Gerhard said, “you’re not going to die”, was so convincing that I felt calmer and confident. But I was still scared and not planning to do it at all.

However, if there’s a thing in life that I don’t like it’s to miss opportunities. I never wanted to bungee jump, but I’m the kind of person that if I have to do something, it must be done well. So, if I’m ever going to bungee jump, why not do it from the highest bungy bridge in the world??

That night, I couldn’t sleep very well. I still had this feeling that something might happen, that the cord could break and my life would be over….

The next day, the “adrenaline day”, of our trip, we headed to Bloukrans Bridge.

Upon arrival Gerhard said: “Those who are not jumping come with me for a walk in the forest and the others who will jump or are still thinking about it, the bathroom is there and you may need to use it first.”

I spent too much time in the bathroom and by the time I got there every one had already left. Gerhard, off course, was waiting for me and said:

– Do the “bridge walk” and you can decide after that.

I headed to Face Adrenalin, they put the harness on, gave me the safety instructions and wrote on my right hand my weight and a number.

While a staff member was walking me towards the bridge, he was saying some bad words in Portuguese to make me laugh and relax. I was still very scared and not sure of what I was doing.

The “bridge walk” is hair-rising! You’re walking on a net at 216m (a 70 story building) above ground and it’s completely safe because you’re surrounded by an iron structured covered with a thick and resistant net. But when you look down, it’s so frightening!

I finally joined the other jumpers at the bridge when a staff member started calling us by the name, requesting our number and weight to let us know the sequence of the jumps.

As energetic African music was playing, people were getting excited and I was getting more and more nervous and scared.

The first to jump was a lady. They just counted 3, 2, 1, bungy and she jumped. OMG. I could not even see the people jumping that I would get butterflies in my stomach… How could I jump??

My turn was getting closer and I haven’t made up my mind. I was convinced that I would not die anymore, however I still had to overcome my fear.

I talked to two Brazilians who jumped before me and they were so happy and encouraged me to do so.

They called me, put me on a seat and attached the cords to my ankles and a security one to the harness on my chest.

Sitting on a bench and watching people jumping knowing that you’re going to be next one is petrifying!

The music does boost you and the person responsible for the jumps was saying bad and funny words in Portuguese to me trying to keep me from getting to nervous before the jump.

And then the time was there. My turned had arrived and two guys helped me to walk towards the bridge’s edge. I couldn’t walk very well with the cords on my ankles.

I knew that it would not be like everyone else. 3, 2, 1 bungy would not work for me. And it did not.

When you look down and see how high it is and how far you are from the tress and river you just don’t want to jump anymore. Getting on the edge of the bridge is so scary that I was changing my mind. I actually said that I didn’t want to jump anymore and was hugging them… But the staff knew I could do it and was encouraging me.

I wasn’t feeling good and thought that I would faint.

They started kicking my feet to the edge and saying: “Keep going, keep going. C’mon! That’s right, that’s right.” It took me over one minute to walk few centimeters..

Then I jummmmmmmmped. O M G !

I was screaming and petrified, but at the same time enjoying the free fall.

When the cord pulls you back you feel so relieved but also some butterflies in your stomach.

I was like a human pendulum going up and down without believing that I jumped. I put my hands on my head, laughed and felt the tranquility of the Bloukrans River Valley.

Then from nowhere someone arrived to bring me back to bridge.

While we’re being lifted up from a cord, I got scared again and I thought: if this cord breaks down I would fall and die…

I can confess that I only felt completely safe when we were on the bridge again. And then, it was just exhilaration. I was extremely happy and euphoric.

I had the feeling of great accomplishment like I had won the lottery.

I still couldn’t believe that I had bungee jumped. But now, instead of being worried and uncomfortable, I was full of joy and had a big smile on my face.

I was scared before the jump.

Jumping from Bloukrans Bridge, the highest bungy bridge in the world, was one of the scariest and most memorable experiences of my life!

Sometimes we have to push ourselves to overcome our fears. Life is made up of challenges and opportunities and this is what makes life so interesting.

What are you waiting for to overcome yours??

You may also be interested in: 10 Things you Should Know before Going South Africa

Don’t forget to buy a travel insurance, which can literally be your lifeline if something happens to you and if your luggage is lost or stolen. I always use World Nomads Travel Insurance for independent travelers. It’s easy to buy, extend & claim online, even after you’ve left home. Get your travel insurance here.

Watch Video: Jumping from Bloukrans Bridge: the highest bungy bridge in the world.

Book your trip to the Garden Route + Addo with Hot Spots 2 C online and get 5% off using my promo-code. Book your tour now! 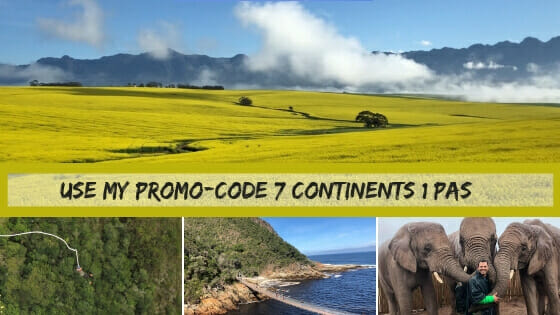 Some products that I use and Recommend

* The bungee jump was a courtesy of Hot Spots 2 C and all the opinions here are mine and unbiased. 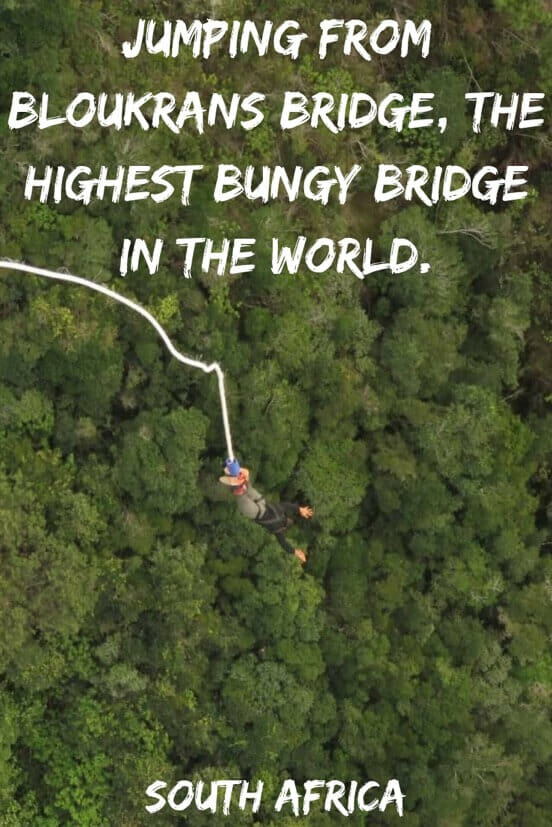 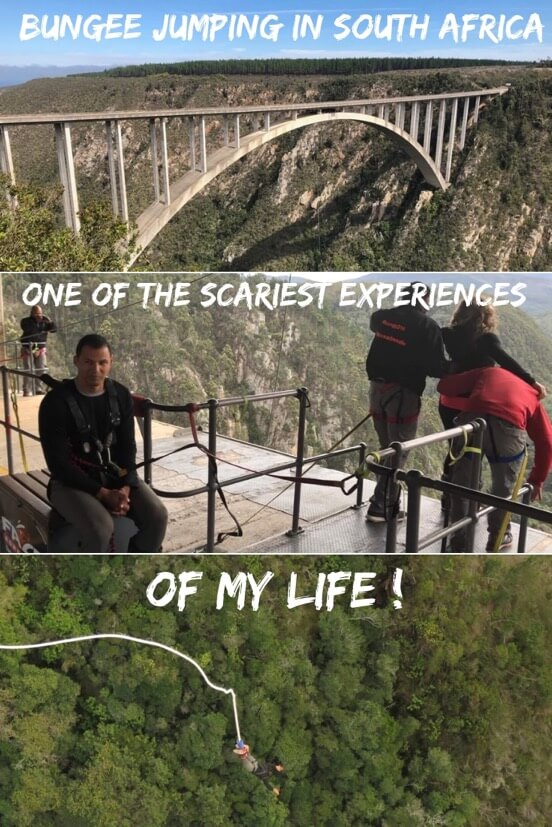 5 thoughts on “Bloukrans Bridge Bungee Jump: one of the scariest experiences of my life!”