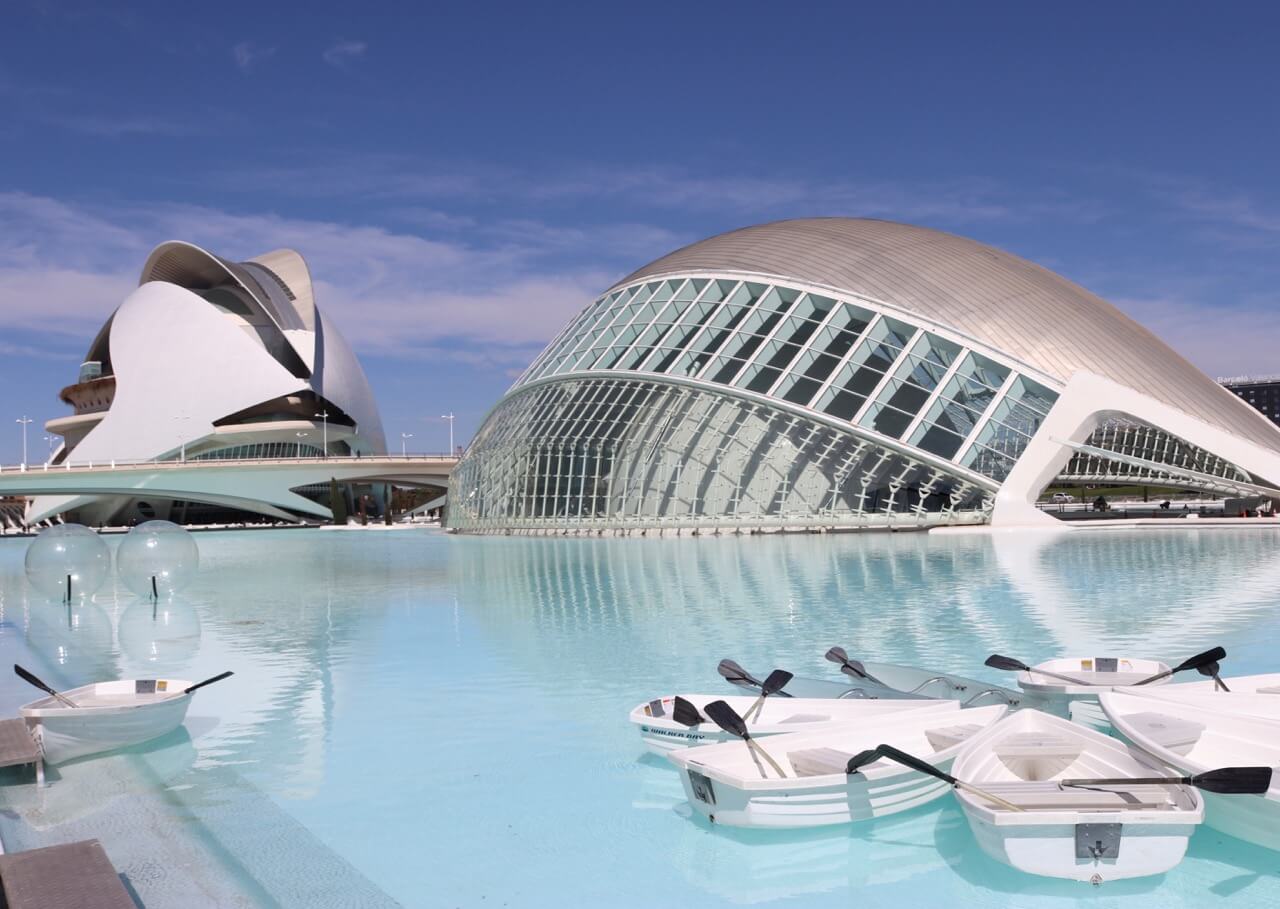 Valencia is the third biggest city in Spain and was founded in 138 BC. It has a rich and interesting history, extraordinary points of interest and a fascinating contrast between a medieval and a futuristic city.

The first time I saw a picture of Valencia was on social media when one of my cousins visited the City of Arts and Science there – I was astonished by the otherworldly attraction. Little did I know at the time that not only would Valencia become one of my favorite Spanish destinations, but one day I would also live there briefly.

7 Best Things to Do in Valencia

There are so many excellent things to do in Valencia that during every visit I endeavor to have new adventures and go to points of interest that I’ve never been to before.

So I decided to make a list of the 7 top things to do in Valencia so next time you’re in the city, you will know what to do to get the most out of your visit.

1. Visit the Futuristic City of Arts and Science

One of my favorite things to do in Valencia, is to go to the City of Arts and Science, one of the greatest landmarks in Spain.

Designed by the renowned Valencian architect, Santiago Calatrava, and Félix Candela, this cultural and architectural complex is made up of six ultra-modern buildings and a white cable-stayed bridge.

Located at the end of the Old Turia Riverbed, construction on it started in July 1996, with the first building inaugurated in 1998 and the final unveiling only happening in 2009.

There is so much to see and do in the City of Arts and Science, that you can easily spend half a day there and still not see everything.

You could pay a quick visit to the City of Arts and Science just to take pictures and marvel at the architecture, but I really recommend taking the 1½ h guided tour in the Opera House to learn more about the construction of this remarkable building and also see some of its main halls; as well as visiting the L’Oceanogràfic. If you are travelling with kids, the Science Museum is also a great option.

The City of Arts and Science is one of Valencia’s most important points of interest and you should definitely put it on your “What to do in Valencia” list.

2. Be surprised by Valencia’s Sistine Chapel

If you already surprised to hear that there’s a “Sistine Chapel” in Valencia, just wait till you see the Church of San Nicolás in person.

Also known as Parroquia de San Pedro Mártir y San Nicolás Obispo, this catholic parish church was constructed in the 13th century, completely refurbished in Valencian Gothic style in the 15th century and decorated in baroque style at the end of the 17th century.

Between 1697 and 1700 the almost 2000 m² ceiling was painted by Dionís Vidal with the life of San Pedro Mártir on the left, and San Nícolás de Bari on the right.

During the Spanish Civil War, 1936-1939, the chapels were destroyed and the church was converted into a warehouse. But in 2016, Iglesia San Nicolás was completely restored and recovered its full splendor.

OMG, when I entered the church and saw the gothic vaults covered with superb and vivid frescoes I was completely speechless.

Iglesia San Nicólas is one of the greatest examples of coexistence between baroque and gothic architectures and best things to do in Valencia.

I just loved it!!

3. Discover a piece of Africa in Valencia

Since 2008 when the Bioparc opened, Valencia’s visitors can get close to wild animals and experience them in re-creations of African ecosystems, such as The Savannah, Madagascar and an Equatorial Forest.

This 10-hectare (25 acre) innovative animal park was designed according to the zoo-immersion concept, where animals live in social groups of their own kind and coexist with other compatible species, as occurs in nature.

Paths and tunnels connect the areas and there aren’t traditional railings and cages common to many zoos. Instead they use natural barriers to separate visitors from the animals, such as rivers, ponds, streams and rocks.

I was truly impressed and fascinated by the Bioparc!

Bioparc Valencia is located in Cabecera Park, at the eastern end of Turia Gardens, within a 15 min drive or 40min walk from the city center. Don’t miss the Birds and Mammals Exhibition held everyday at the amphitheater, an open-air arena surrounded by acacia and baobab trees.

4. Wander around the Old Town

Valencia is one of the oldest cities in Spain and its first settlements date back to 138BC. The city fell under the Roman and Byzantine empires, ruled by Moors and Christians; was walled twice, first by the Muslims during the 10th century and secondly under the regime of king James I during the 14th century.

Wandering around the old town is one of the best things to do in Valencia because it is an opportunity to go back in time, learn about Valencia’s history and admire the outstanding architectural legacy inherited from different cultures and civilizations.

Some of the points of interest in Valencia’s old town that you can’t miss are: Plaza de la Reyna (the city’s busiest square and the gateway to many interesting attractions), Valencia’s Cathedral (where you can find the holy chalice used by Jesus during the Last Supper), the Silk Market (a UNESCO heritage site and one of the city’s architectural treasures), Plaza de la Virgen (one of the oldest squares in Valencia) and its Basilica, the Almonia Museum (where you can see the origins of the city), Serranos and Quart Towers (two city gate towers remaining from the ancient walled city of Valencia), Plaza del Ayuntamiento, the Ceramic Museum, El Carmen district, etc.

I’m sure you’re familiar with paella, the queen of the Spanish cuisine prepared with rice, tomato, peppers, garlic, onion, saffron and seafood.

But you may not know that this renowned Spanish dish was created in Valencia, in El Palmar district, in the middle of the 19th century.

The most popular version is seafood paella, but the original “paella valenciana”, consists of white rice, green beans, meat (chicken, duck and rabbit), white beans, snails and seasoning such as saffron and rosemary.

The variety of rice dishes served in Valencia restaurants is enormous and among them you can find paellas of: meat, seafood, mixed, pork, black, vegetarian, lobster, etc.

During my recent 10-day trip to Valencia, I ate paella almost every single day. Why? Because the dish always tastes better where it was created, and having paella with a glass of wine on a sunny plaza is one of the top things to do in Valencia.

Valencia offers a great number of green spaces to compliment its urban city landscape. Among those places, my favorite is Jardín del Turia.

Situated in the former bed of the river, this 1million square meters lush garden surrounded by ancient walls and buildings allows cyclists and pedestrians to traverse much of the city without using the roads.

I love strolling around the gardens and every time I’m in Valencia I opt to walk along the “río”, as locals refer to it, instead of using public transportation. I’m fascinated by their decision to change the course of the river after a massive flood in 1957 and create this brilliant green area in the centre of the city. 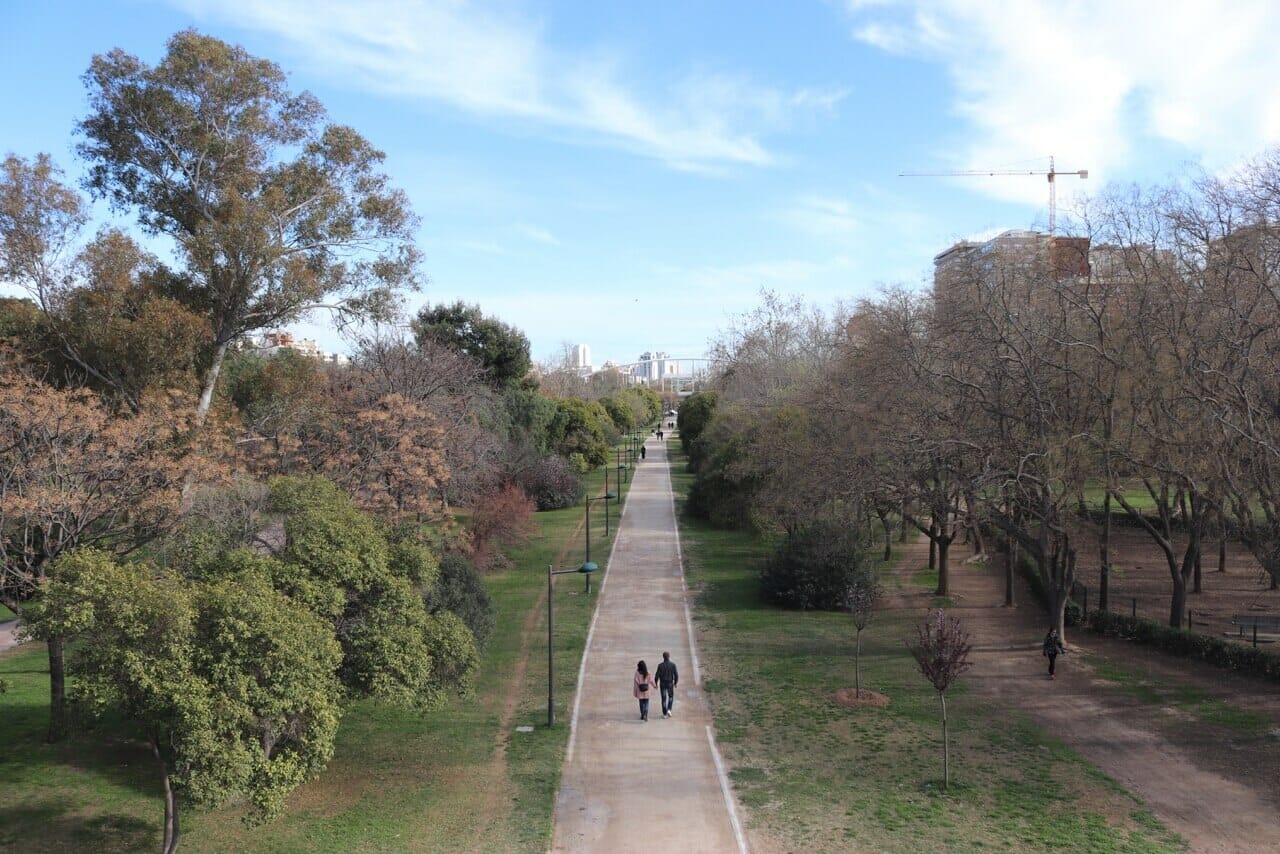 7. Be in awe of the Valencian Gothic paintings at Museo de Bellas Artes

Located in a stunning baroque building in the former Turia riverbed, this art gallery was founded in 1913 and houses more than 2,000 works, including primitive Valencian paintings (from the 14th to 17th centuries), a self-portrait of Diogo Velásquez, paintings by artists such as Goya and El Greco, sculptures by Mariano Benlliure, interesting archeological pieces and a collection of contemporary art.

But what really stands out is the collection of Gothic panels. Located on the ground floor, some of these magnificent paintings stretch from floor to ceiling and they left me completely in awe!

A visit to the Valencia Museum of Fine Arts, which also features one of the most important 16th century Renaissance courtyards, should take around 1h, and there is no entrance fee.. You should definitely put it on your “Free things to do in Valencia” list.

These are just seven of the best things to do in Valencia that you can easily achieve in three, or even two, days.

Valencia is a beautiful and exciting city and if you follow these tips you will understand why it is one of the best cities to visit in Spain.

Other Things to do in Valencia and Points of Interest

Other points of interest in Valencia that you might consider visiting are:

– Mercado Central: a modernist style building and one of the oldest markets still in use in Europe;

– Colon Market: a former food market that has been converted into a gourmet venue;

– Valencia beaches: if you visit Valencia from May to September, you can’t miss the urban beaches Playa de la Malvarrosa and Las Arenas and unspoiled beaches near Valencia such as Albufera and la Devesa.

– La Marina de Valencia: one of the hottest spots in the city during the summer offering music, sports, culture, nightlife and gastronomy.

– Marina Beach Club: a trendy beach club/restaurant with a large dining area and poolside seating that provides great views of the beaches and sea.

– Old Port Clock Tower Building: another one of Valencia’s architectural treasures and one of the most iconic buildings in the city.

– Valencia Institute of Modern Art (IVAM): one of the leading institutions of modern and contemporary art in Spain.

I always recommend to buy a travel insurance, which can literally be your lifeline if something happens to you and if your luggage is lost or stolen.

I always use World Nomads Travel insurance for independent travelers. It’s easy to buy, extend & claim online, even after you’ve left home. Get yours here.

Planning a Trip to Valencia

Valencia, the capital of the autonomous community of Valencia and the third-largest city in Spain after Madrid and Barcelona, is located on the east coast of Spain, around 300 Km (186 mi) of Madrid, Spain’s capital (check map here).

How to get there?

There is an international airport in Valencia, and some of the airlines operating flights to Valencia are British Airways, Easyjet, Vueling, Iberia, Air Europa and Ryanair.

You can book your flights with Skyscanner, which is the website that I use and trust.

You can also get to Valencia by train from Madrid and Barcelona with Renfe, or by bus with Avanza or Alsa.

Valencia has a Mediterranean climate with consistently pleasant weather. Average high temps range from 15 C (59 F) in the wintertime to 30C (85F) in the height of summer.

You can visit Valencia all year round and I would say that the best time is between May and September.

However, if you want to see the Fallas Festival you must go between 15th and 19th of March.

Where did I stay?

Book your tour online in advance with Get Your Guide here.

Powered by GetYourGuide.Become a partner. 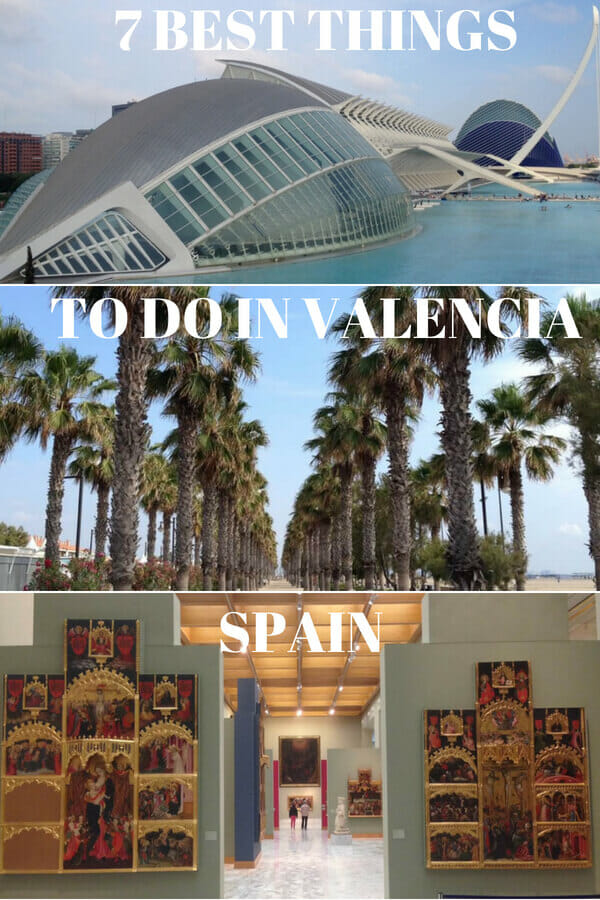 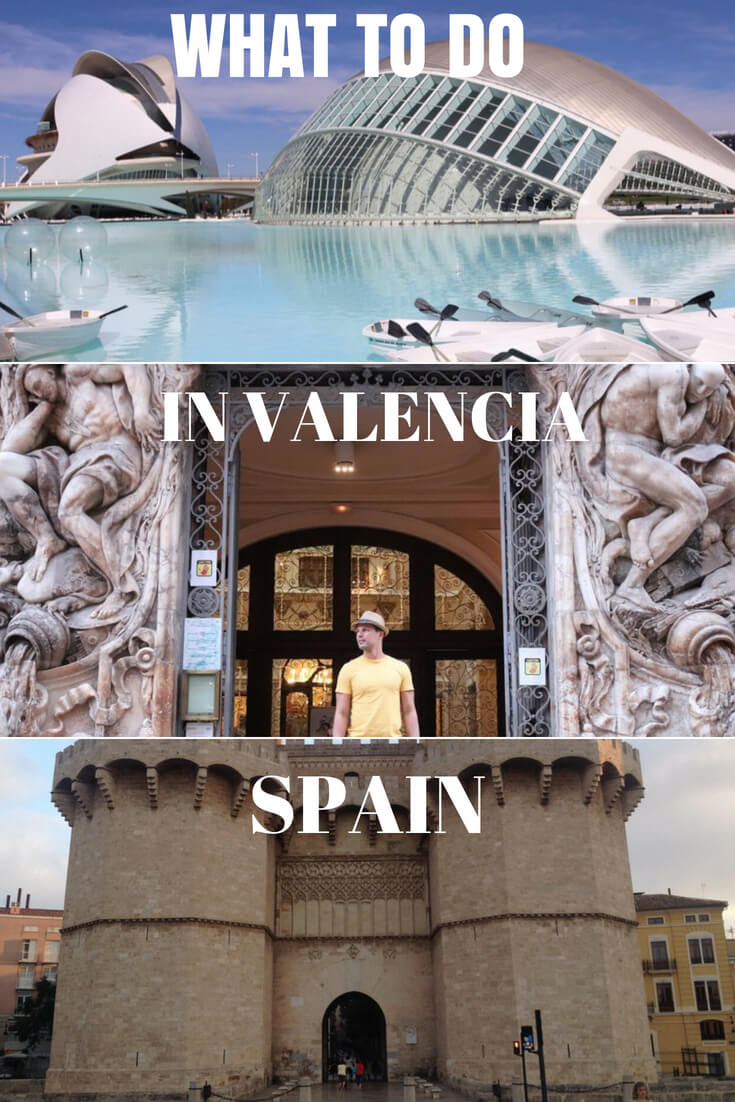 3 thoughts on “7 Best Things to do in Valencia, Spain”