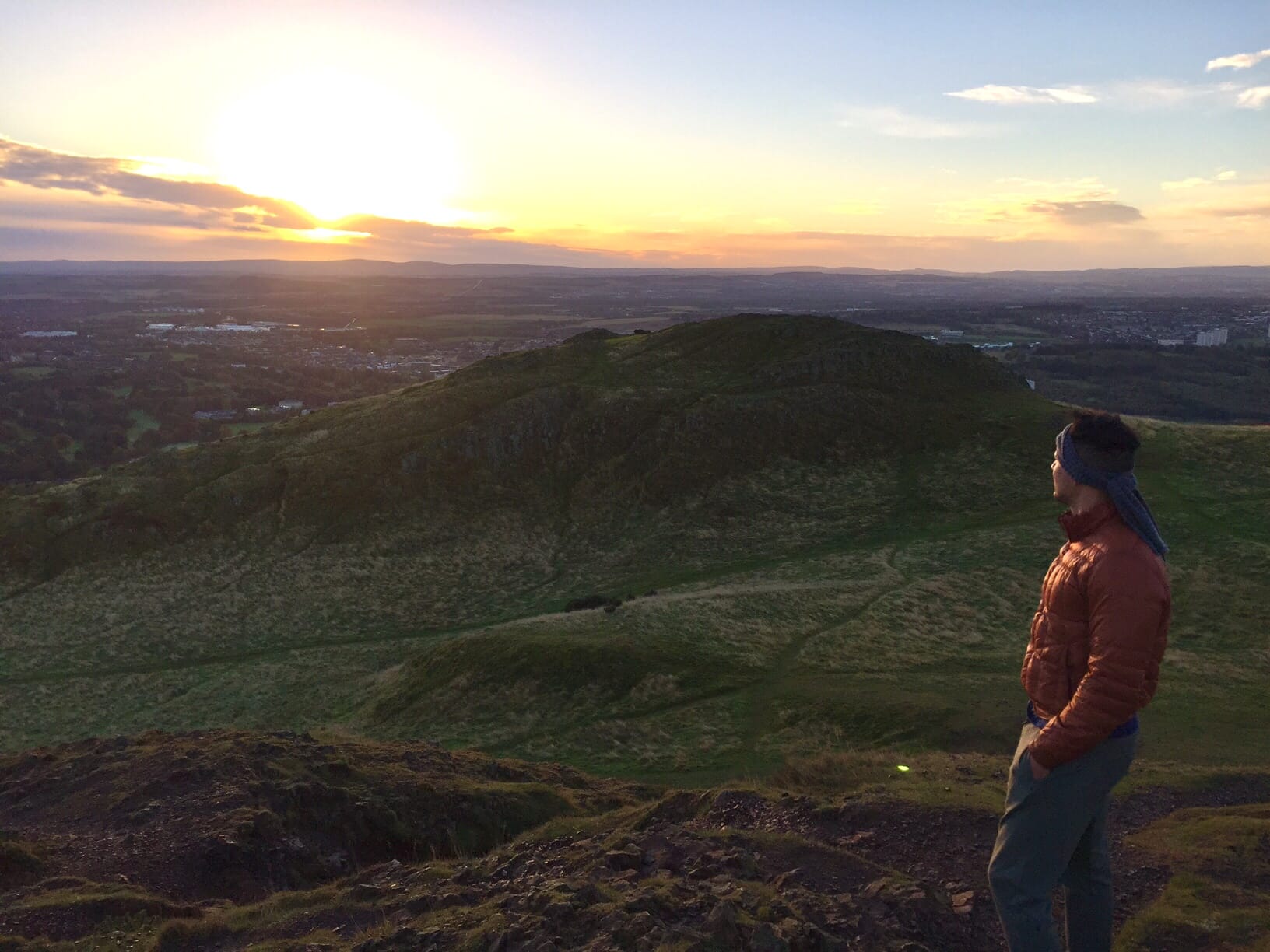 Hiking Arthur’s seat was one of things that I wanted to do most when I planned my trip to Edinburgh.

Not only because I’m an adventurer and love exercising, but also because this imposing peak provides unparalleled panoramic views of Scotland’s capital.

Edinburgh, one of the best places to visit in Scotland, is nestled among seven hills and originated from volcanic activity that took place over 350 million years ago. Arthur’s seat is the city’s own extinct volcano and is the highest of those hills.

I knew from the beginning that hiking Arthur’s seat would be relatively easy since the top is just 251m (822 ft) above the city, and it takes no more than 30min to reach the summit.

What I was not sure of was if I should do the hike at sunset or sunrise. But after some research I decided to do it at dawn.

If waking up early isn’t for you, go for the sunset but make sure that the weather is going to be good.

The U.K. has a reputation of having “not-that-great weather”.

The truth is, if you spend one week there, and it doesn’t rain at least one day, you are very lucky.

Well, during my trip to Scotland it wasn’t different. The weather changed a lot every day, and in the four days that I was there it was cloudy, sunny with bright sky, grey and rainy, all in a single day.

Hiking in the rain isn’t recommended since the grassy terrain can become slippery and your chances of getting hurt will increase, so it’s important to check the weather forecast before setting out by yourself.

I ended up picking a clear day on which I would be able to see the sunrise, but it was also the coldest day of my trip: 6C and feeling like 3C. Brrrr…..

I woke up at 6:30, packed my backpack with water and fruit, and drove to Holyrood Park, where Arthur’s seat is located.

The closest parking lot to the summit is at Dusanpie Loch, and from there it takes only 15min via a grassy slope, which makes this hike even easier and suitable for everyone.

Unfortunately the street leading to the parking lot was closed and I had to leave the car at the park’s entrance.

I started the hike at 7:13 and instead of following the street towards Dusanpie Loch, I crossed some rocky and grassy slopes and managed to follow the route on the ground left by previous hikers.

There are many other routes that are longer, more difficult and provide different views of Edinburgh. The most common ones are through Salisbury Crags, a long escarpment facing the city.

Even though the sun was not out yet, the big full moon was illuminating the path and making the scenery more beautiful and picturesque. 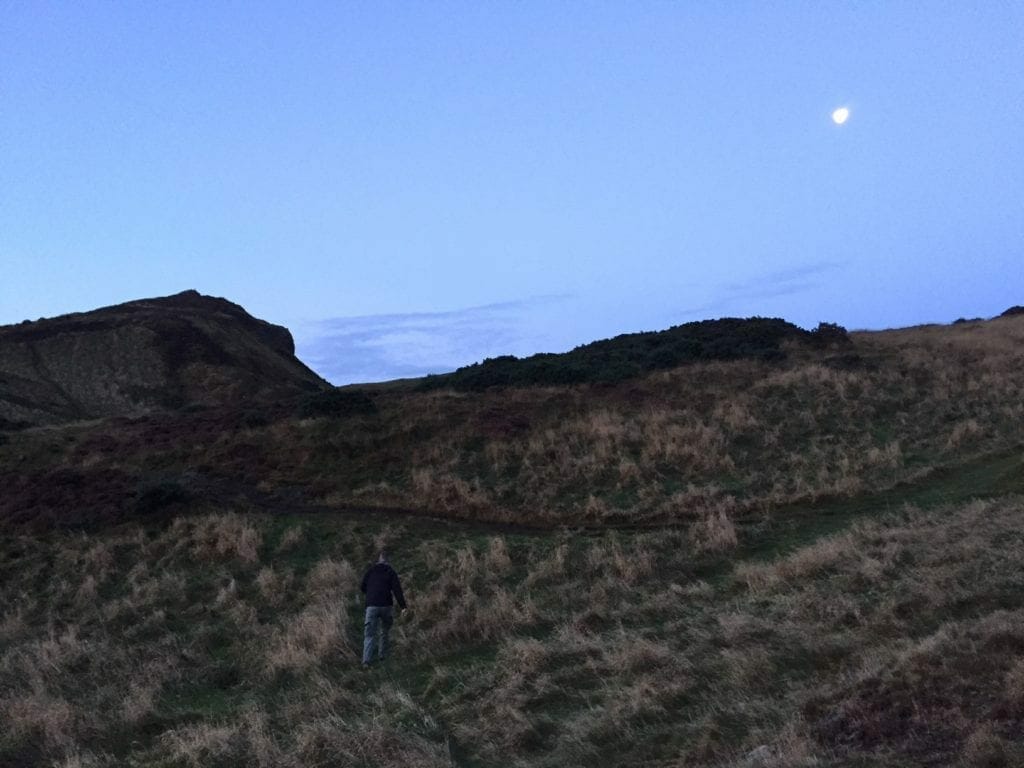 The Old and New Towns were getting smaller and the sky became brighter as I approached the summit.

The wind was blowing quite strongly and I was freezing…

Arthur’s seat is composed of hills with distinct shapes and elevations that are covered with grass with different shades of green, ocher and grey. This landscape brought to mind the famous Scottish Highlands, but in fact I was in the middle of Edinburgh, the second biggest city in Scotland. 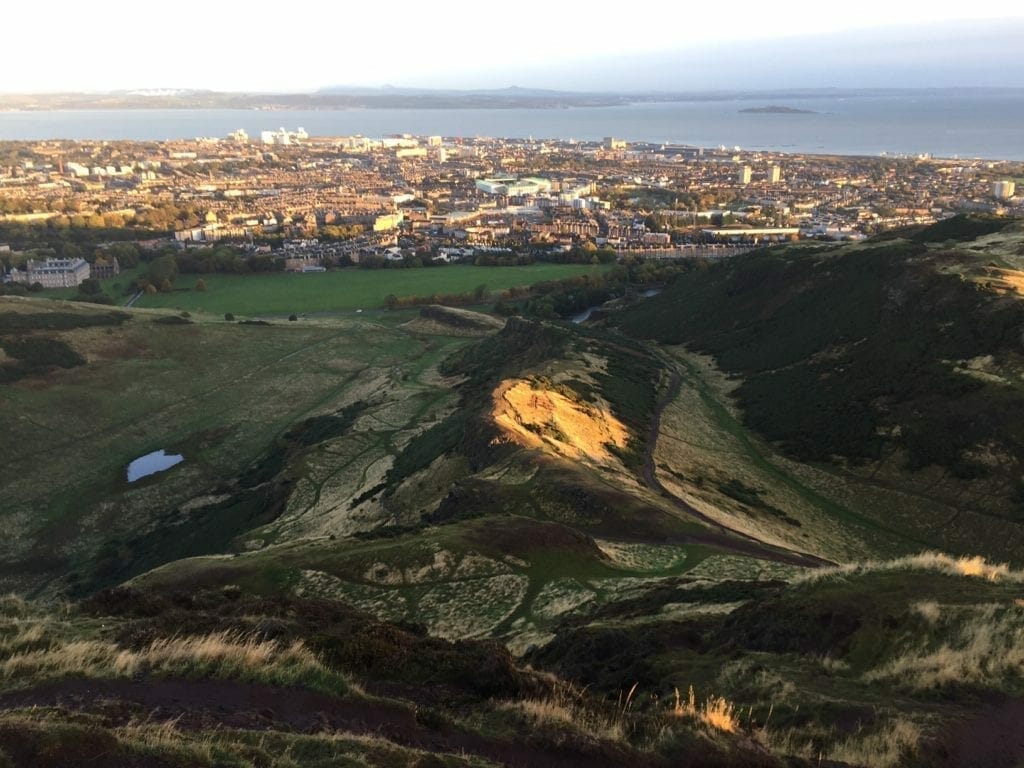 The last final meters is a steep path with a metal chain railing leading to a rocky slope to the summit.

Exactly 30min after I started, I was on top of Arthur’s seat, and while the sun had not risen yet, the view was magnificent.

At the top, the wind was even stronger, the temperature dropped (feeling like 2C), and my hands and ears were frozen. The sun was still behind the clouds and I was not sure if I should leave or wait a little bit longer.

The panoramic view includes the Old and New Towns, Hollyrood Palace and Park, the North Sea, Salisbury Crags, Dunsapie Hill and several other smaller hills. Despite the cold weather I was really enjoying one of the best of Edinburgh’s viewpoints.

After a few more minutes the sun started rising and enhancing Arthur’s seat’s beauty even more. Birds flying high and the omnipresent full moon made me feel delighted.

I took more pictures and contemplated the incredible landscape once again before taking the way back down.

The sun was out, the sky was blue and, surprisingly, the big full moon was still there. 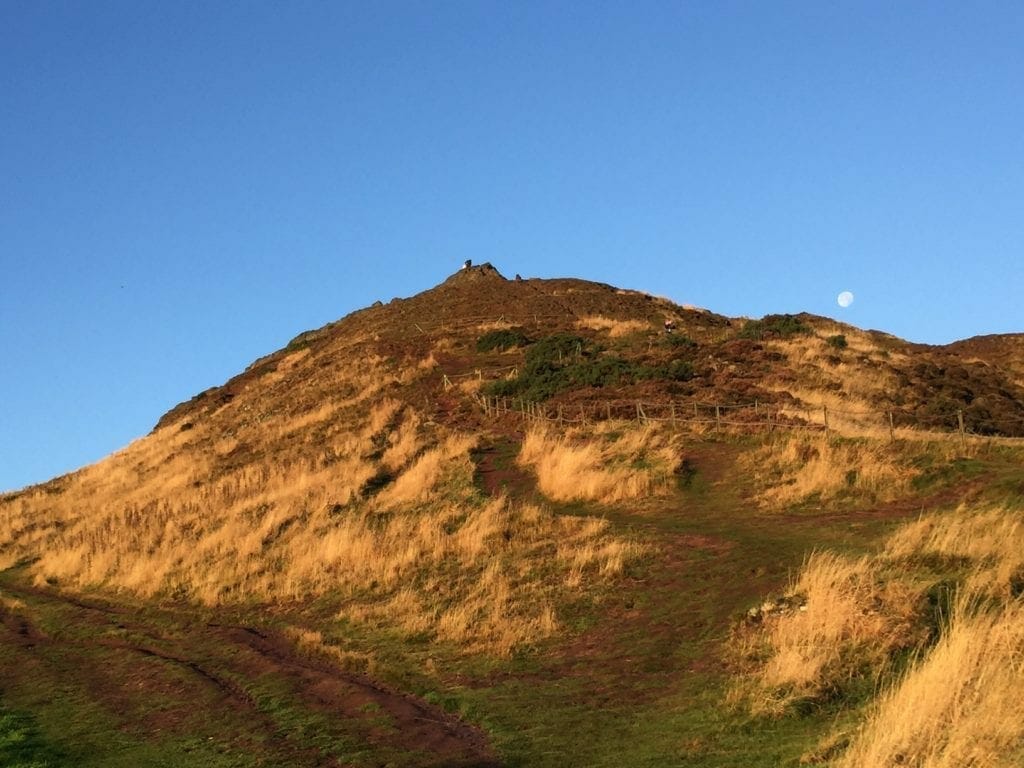 I wished that I had more time to enjoy Hollyrood Park and wander around its hills. But after all the exertion,

I was hungry and wanted to go back to the hotel to have breakfast and enjoy my last few hours in Edinburgh.

Hiking Arthur’s seat should be on everyone’s list when visiting Edinburgh!

It’s a great opportunity to feel like you’re in the Scottish Highlands and at the same time getting a birds-eye view of one of the most beautiful European capitals.

Edinburgh, the capital city of Scotland, is located in Southern Scotland on the East coast (Map here).

∗ There’s an international airport in Edinburgh which is very well connect with many European capitals and other cities around the world. Some of the airlines are: RyanAir, EasyJet, British Airways, Flyby, Emirates , Delta and TAP. From the airport you can take the tram to the city center.

∗ There are also trains from London and other cities in the UK. You can check the National Rail for more info.

∗ The cheapest way to get to Edinburgh is by bus, and some of the companies are: MegaBus, National Express and CityLink.

You can visit Edinburgh all-year around, but keep in mind that January is the coldest month, October is the month with most rain fall and the driest months of the year are in spring and early summer.
August is considered by many people the best month to visit Edinburgh because of the festivals that happen in the city and also the days are longer and the weather is good. However this is also the busiest month so accommodation tend to be more expensive.
If you want to avoid the crowds you can go from April to June.

I stayed at The Principal Edinburgh George Street Hotel.

2 thoughts on “Hiking Arthur’s seat: an extinct volcano in Edinburgh”