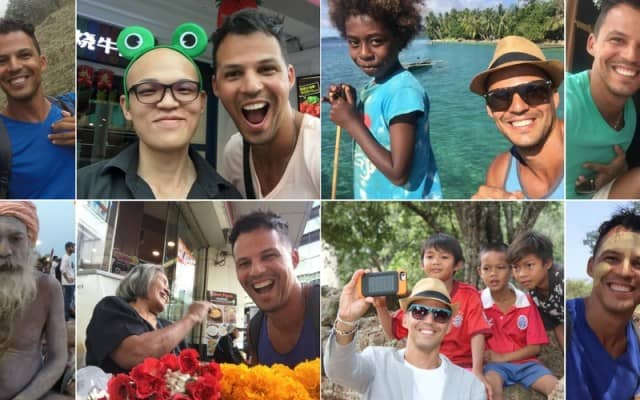 It seems it’s all about selfies nowadays!
According to The Telegraph, a million selfies are taken every day.
Scroll down any social media account and it won’t take you very long to find someone with a raised eyebrow, slightly pouty lips and sideways smile looking directly into the camera.
Just on Instagram alone, there are over 311 million pictures with the hashtag #selfie, and 328 million with #me.

Not to mention the many frame, filter and retouch apps available to give your selfie that added touch of glamour. Selfies are big business these days.

Self-portrait paintings date back as far as ancient Egypt, and many artists, including Rembrandt, Van Gogh, Frida Kahlo and Andy Warhol, famously painted themselves. Even the first ever portrait photograph of a person was a selfie, taken in 1839 by Robert Cornelius in Philadelphia.
But it was only in 2010, when Apple launched the iPhone 4 with a front-facing camera that “The golden age of the selfie” was born. In fact, it became so popular that “Selfie” was declared the “2013 Word of the Year” by the Oxford Dictionaries and Twitter declared 2014 as the “Year of the Selfie”.
People have become so obsessed with selfies that in 2015 more people died taking selfies than were killed by sharks. In 2016 alone, 100 deaths were attributed to selfies.

While many people love selfies, others loathe it.
Some believe that these auto portraits have become the greatest symbol of the narcissistic age, an era where we care more about how we look and present ourselves in front of the camera than who we really are.
According to the American writer John Paul Titlow, selfie users “are seeking some kind of approval from their peers and the larger community”, thus it often signals a lack of self-confidence.
But the selfie can be also a tool for empowerment. Not only because you’re in complete control of the image and therefore able to project the best version of yourself, but also in the growing trend of “natural” or “authentic” selfies, where one’s flaws or imperfections are proudly on display, and which can help with self-acceptance.
Some people use it merely as a way to objectively view themselves, like when taking pictures to assess an outfit while shopping or track your progress in the gym.
There is also a sociological and anthropological aspect to it, a record of one’s appearance at a specific point in one’s life.
No matter why you’re taking them, with the proliferation of social media sites these images can now be shared worldwide, allowing your pictures, beauty and creativity to move beyond your circle of friends and family.

Me, My Selfies and I

If you follow me on Instagram or Facebook, you will have noticed already that I barely take selfies.
I’m not a big fan of them and I have to admit that I find it a turn-off if I see someone’s timeline filled with endless selfies. It immediately makes me think they are very superficial.
Not to mention that it can be a massive waste of time. It is said that the “selfie queen”, Kim Kardashian, took 6000 selfies in four days on a trip to Mexico. That equates to more than one selfie per minute! It makes you wonder if she saw anything else on that trip besides her own pretty face… OMG.
However, I do sometimes take selfies myself. Usually in moments when I feel something interesting or positive has happened to me that I want to share with friends, family and followers.
And seeing a selfie where the subject is obviously having a good time and happy, can be a truly uplifting experience.

Selfies as a vehicle of communication

During my last Asia trip (December 2016 to May 2017) I did took a lot of selfies.
Not because I suddenly felt awesome all the time or wanted to give constant updates, though.
No, these selfies were used as vehicles of communication. As a solo traveller, I spend a lot of time with myself and I needed an excuse to talk to the local people.
I decided to meet at least five people in every country I visited during those five months. I wanted to learn more about their cultures and lives, get some tips from an insider and hopefully make new friends.

The idea came to me in Thailand – in Chatuchak Park, one of the oldest public parks in Bangkok and which is very popular with tourists and locals. I was relaxing on the grass when a group of local teenagers arrived and started taking selfies… They were all dressed in western clothes (denim pants and jackets, t-shirts with NYC logos). It was funny to observe how into their non-stop selfie photo-shoot they were!
When leaving the park, I suddenly wondered if I should’ve taken my picture with them. A selfie, of course.

Later, on my flight to Singapore, I decided to create a “movement”, called Selfies with Locals.
The first ones I took on the subway in Singapore. I have to admit I was very shy and it was quite awkward. But the Singaporean people I met were very friendly, and I ended up chatting to someone for the whole journey.

After the great reception for my first selfies, I was much more relaxed and became quite shameless in approaching local people for selfies.

I’d made a decision to approach a broad range of people, of different ages, genders and looks. I wanted the selfies – and my friends – to be as diverse as possible.

The obstacles to overcome was the language barrier, a lack of time and of course, also natural chemistry in order to keep the conversation and the friendship going.
But I met some amazing people, learned interesting facts about their cultures, and had a lot of fun on the way.

But the biggest reward was seeing the very many smiles…
Particularly with elderly people and especially those who weren’t too familiar with smartphones and technology. They had not learned how to pose, so I found their smiles completely natural and genuine.
They smiled with the soul…
And even though we weren’t able to have conversations, because of not speaking the same language, I felt a real connection and utter delight in seeing their smiles…

It’s very special to see these pictures of the many different people who were part of my journey, and be able to share it with you.

So the next time you travel, meet some locals, take a few pictures and share those moments with us using the hashtag #selfieswithlocals. And if you need help, here are a few selfie tips to become a selfie expert…

How to take a perfect selfie

Watch my video with the best selfies that I took and a highlight of every country I visited.