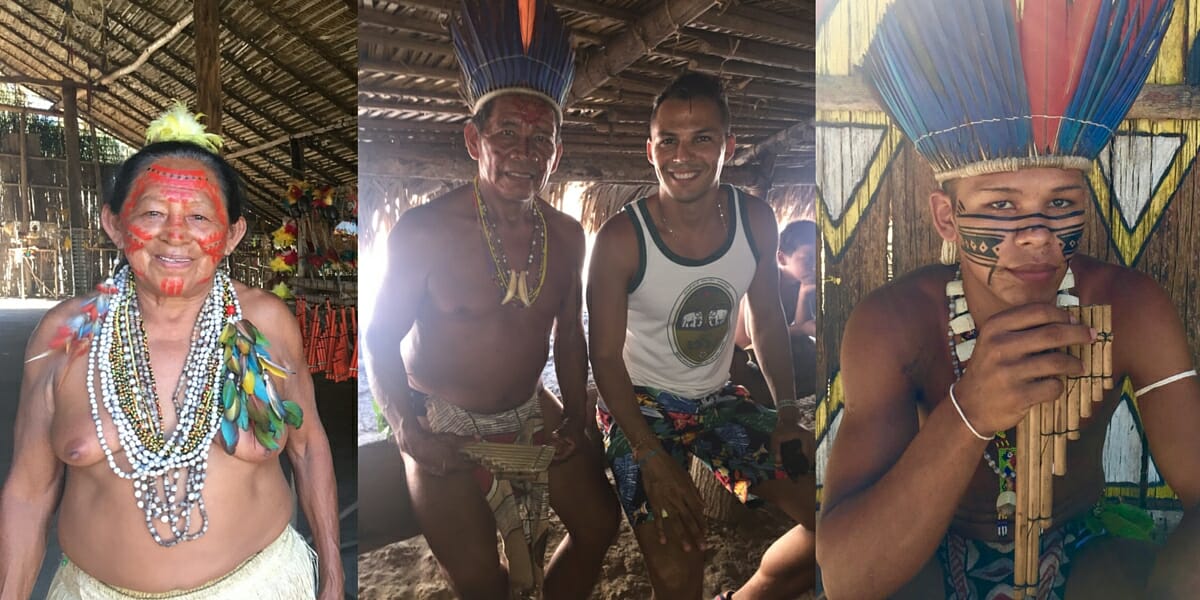 One of the reasons that I came to the Amazon was to visit an indigenous tribe. Another was Swimming with the pink dolphin.

I grew up watching so many programs about indigenous people, specially the ones in the Amazon, that I was very curious to have at least a minimum contact with them. In Brazil we even have one day to celebrate the indigenous culture.

The indigenous tribe that we visit in the excursion, Aldeia Cipiá, lives around 80Km of Manaus. But despite its proximity with the city they still preserves old habits.

When the boat arrived we were welcomed in a big hangar made of wood and fibers, decorated with indigenous paintings, by the xamã (the chief of the tribe). A man on his 60’s, with the face partially painted, wearing a swimming suit covered with a piece of painted sheet on the front and leaf on the back, a beautiful necklace made of jaguar teeth, and a crow adorned with colorful feathers.

I sat down close to some member of the indigenous tribe and started to talk to a good-looking one by my side. But he was so shy that the dialogue was very short… They all had gorgeous necklaces made of seeds, feathers and shells, painted face and the men had awesome crows and women ravishing earing.

The xamã started the presentation of the rituals to receive visitors. The first was Jurupari’s dance, a supernatural god’s dance. Because of that there is no participation of the indigenous women and children and they never saw the instrument.

The teenagers guys took their big blower wood instruments and started making an interesting sound out of it, and moving it up and down. The rituals were just starting and I was exhilarating! 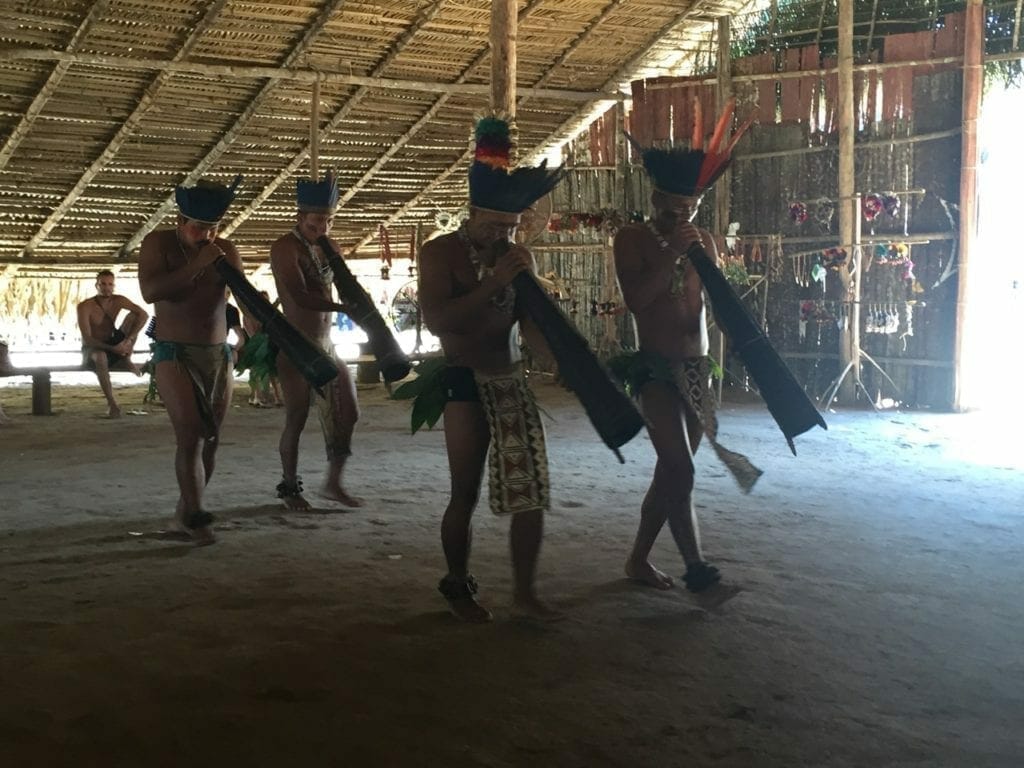 The next was Japurutú’s dance executed only by the men and means offer of fruit, fishes, meat or crafts. The made a big circle, put their left arm on the right shoulder of the one in front and started to sing on their on language and make sounds with their instruments.

One by one women lined up in the middle of the circle and then every woman held every other man to do the Capiwayá’s dance. This dance means “serve me” and was created to socialize and mix the languages and races because in the beginning they were all brothers and sisters and no one could get married.

They continued to sing and spin around the hangar using bamboos, rattles, clappers and wands. I was in awe witnessing an indigenous ritual for the first time.

In the end the started to play a very festive song with their flutes for the Reunion dance. The men invited visitors women and the women invited visitors men to join them. It was a big celebration of the indigenous culture and heritage that is becoming very rare to preserve.

Everyone of us, Brazilians and foreigners were moved in the end of the presentation.

We had some free time to visit the village and also to by art crafts. They leave in a very simple way, in few houses similar to the hangar in the middle of the forest, and sleep in hammocks.

I took the opportunity to talk to a teenager girl who spoke perfect Portuguese and the indigenous tribe dialect, and she told me that she goes to a school close by. I also spoke with the xamã, who told me that they receive visitors and the daily activities are fishing and hiking in the forest.

I left the indigenous tribe very happy to see that they still preserve their culture, which is also my own culture that was lost after generations of generations of my family. I felt also proud of the miscegenation of the Brazilian population, because in the end we are all indigenous.

Watch video: Visiting an indigenous tribe in the Amazon.

∗ This is part of the article Best tour in Manaus, that I will still post.

To book this tour and other tours in Manaus visit: www.manausjungetours.com

P.S.: Don’t forget to take the yellow fever vacine at least ten days prior to arrival.

∗ I was invited by Amazing Tours and all the opinions here are on my own and unbiased.