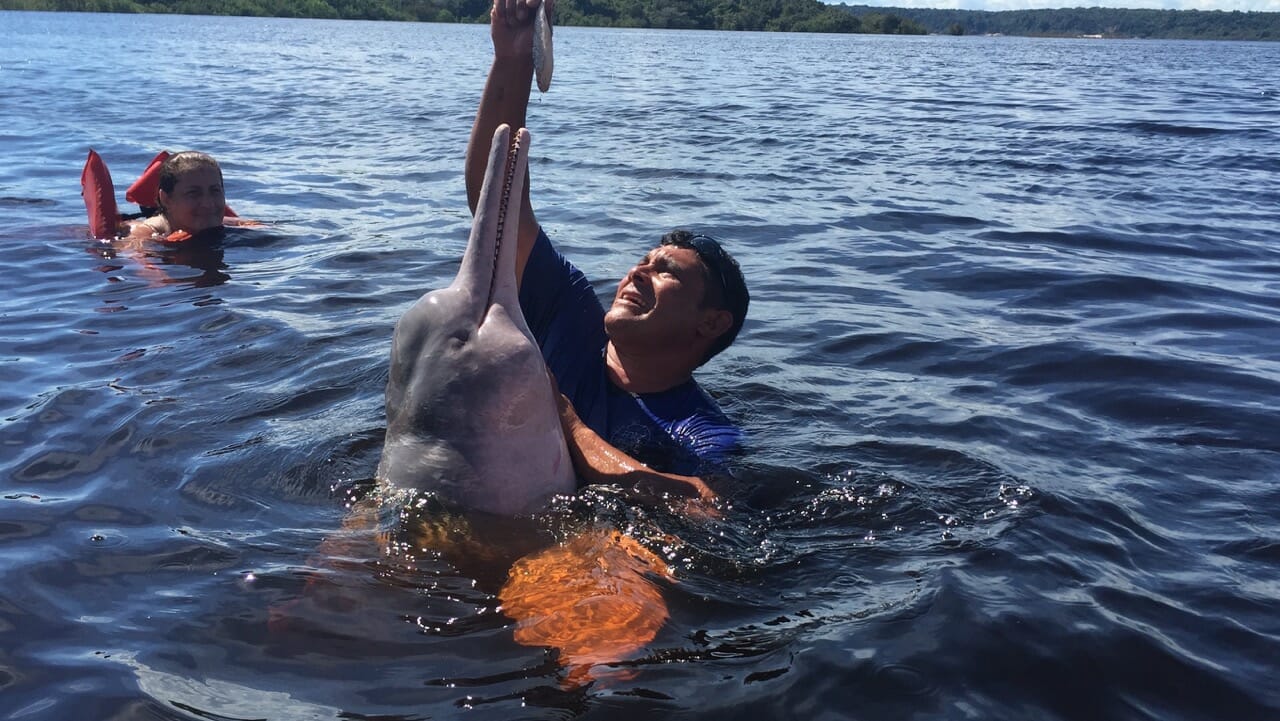 When I started planning a trip to Manaus, I was pretty convinced that I would take the best tour in the city, which would include swimming with the pink dolphin and visiting an indigenous tribe.

Among a myriad of travel agencies I chose Amazing Tours because I knew from a friend’s recommendation that they would deliver a high quality tour with reasonable prices.

I arrived in Manaus in the afternoon and the next day the driver picked me up at the hostel. The day was perfect for a tour: blue sky, sunny and not that hot.

But when we left Manaus port the sun was stronger. The bright blue sky contrasted with the lush vegetation surrounding the river, and sometimes I wanted to jump off the boat and enjoy some swimming along the way. 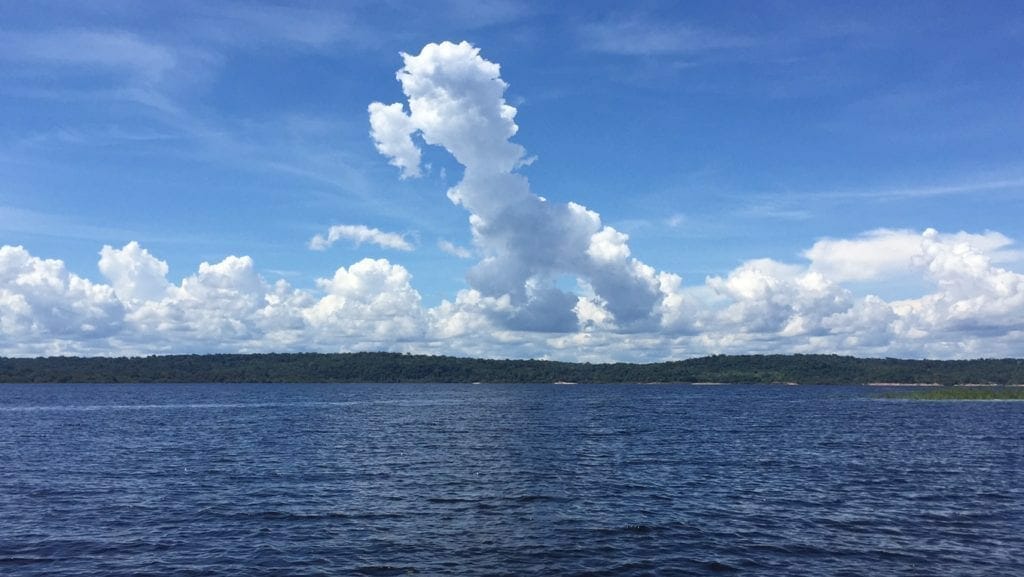 At this point I had made some friends who were also taking this excursion, and we were talking, laughing and specially admiring the stunning landscape.

The boat sailed on the Rio Negro for around 40min until we got to the floating platform where we would swim with the pink dolphin.

The pink river dolphins are only found in South America and Africa. The dolphin’s coloration can vary with age, activity and habitat. Actually in the Amazon there are more gray than pink dolphins and I just saw fewer pink ones.

The pink dolphin is full of legends, and although I’m a Brazilian, I never really took it seriously. The legend for the ancestral people of the Amazon was that the porpoise would transform into a handsome man and seduce the maidens and women of the riverside communities. There are tales of homosexual and female porpoises. It is interesting that these myths served as an excuse for unacceptable behavior, such as an unwanted pregnancy, or an effeminate boy… Therefore many of these animals were killed in the past, and also they were considered a problem for fishermen.

Nowadays the pink dolphins are not killed and have became one of the main attractions on the Amazon, charming thousand of visitors from everywhere in the world. 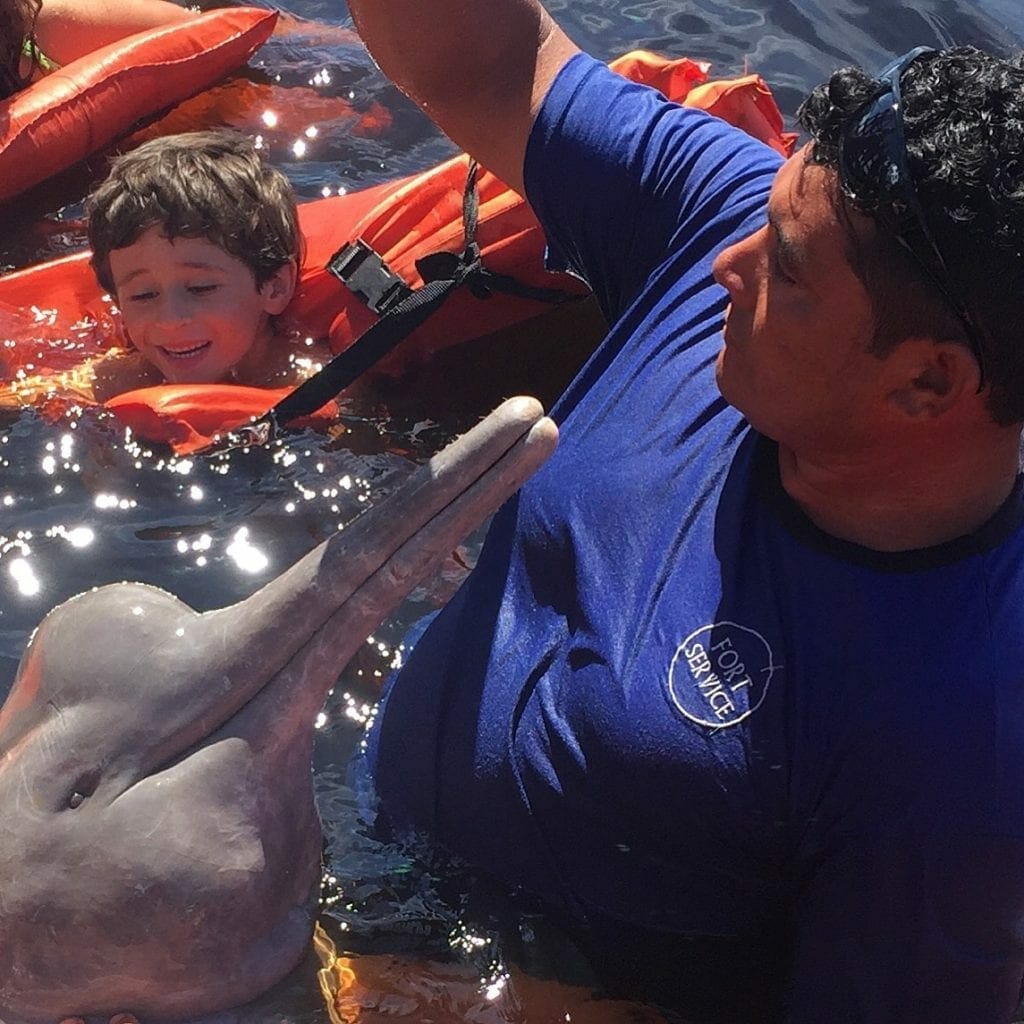 Swimming with the pink dolphin

We jumped off the boat, put our life vests on and finally went in the water.

As soon as I stepped into the river I saw some pink dolphins swimming just a few feet from me. The water was a kind of pocket and everyone was eager to see, touch and swim with these animals.

The dolphins were not bothered by us and they continued swimming underneath our legs and hitting some of us. We were so surprised and laughed.

I was touching and swimming with pink Dolphins for the first time in my life!

The master who feeds them jumped in the water and another guy started throwing some fishes to him. The pink Dolphins were coming to be fed and we gathered around to see it. The adorable dolphins seemed so hypnotized by the master and the fish they were eating that everybody else had a chance to pet them. What a sweet animal!! 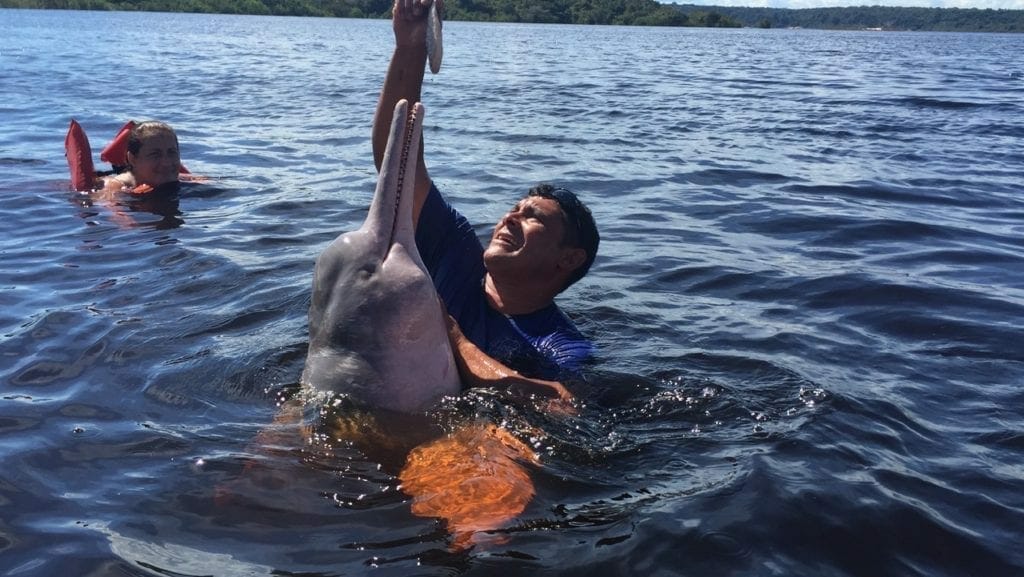 When the fishes were over the dolphins left. And although our guide was calling us we didn’t want to leave. After the whole day under the sun we just wanted to stay in the water.

But we had to leave because after swimming with the pink dolphin we would visit an indigenous tribe and I was really looking forward to it.

∗ This is part of the article: Best tour in Manaus.

To book this tour and other tours in Manaus visit: www.manausjungetours.com

P.S.: Don’t forget to take the yellow fever vacine at least ten days prior to arrival.

∗ I was invited by Amazing Tours and all the opinions here are on my own and unbiased.