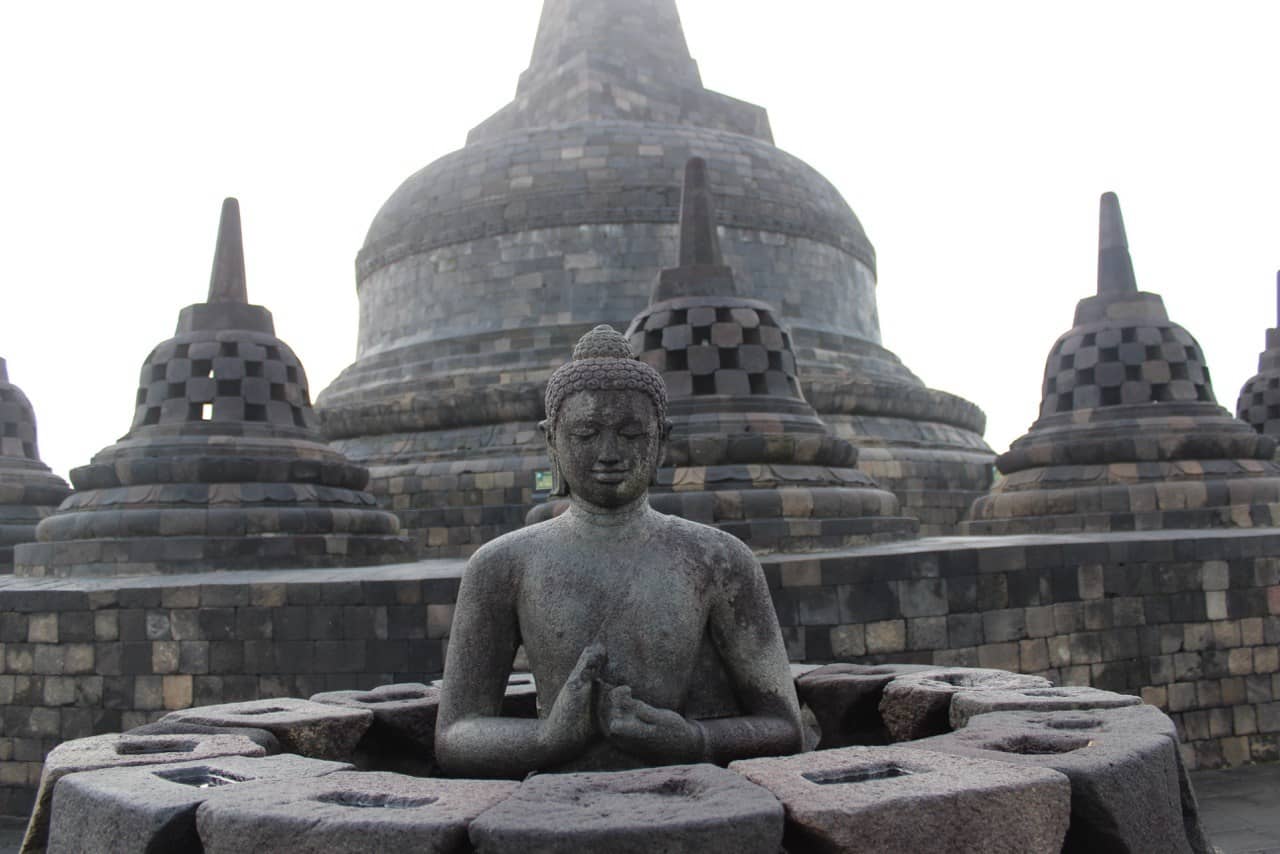 While visiting Indonesia for the first time, I just couldn’t pass up the opportunity to see the sunrise from its greatest temple, Borobudur. In fact, I was so determined to experience it that I booked a Borobudur Sunrise tour with Backstreet Academy months before embarking on my 5-month trip to Southeast Asia. And it was absolutely worth it for one of the most magical sunrises I’ve ever seen. 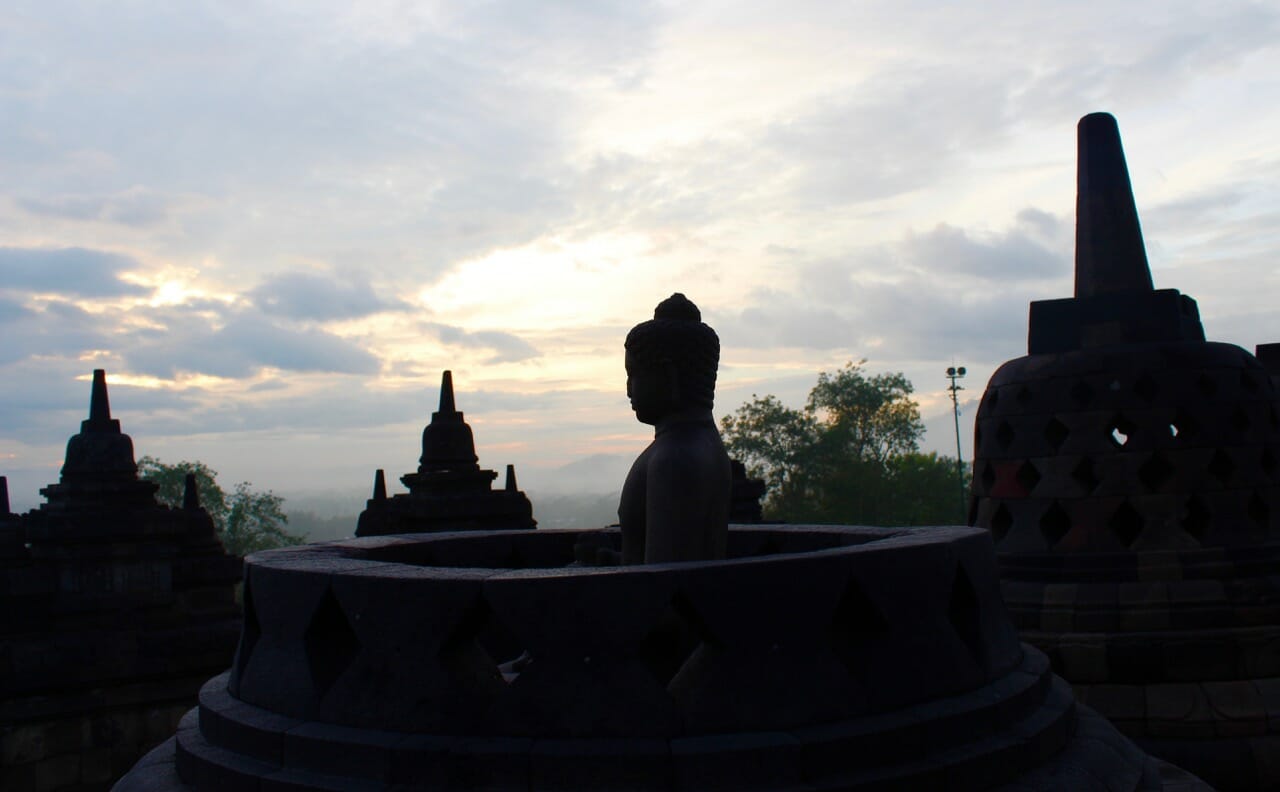 In order to see the sunrise at Borobudur you have to be at Manohara Hotel Borobudur around 4:30AM.

You don’t necessarily have to be a guest of the hotel to see the sunrise, you can stay in any hotel near Borobudur temple as I did.

Borobudur, the world’s largest Buddhist temple and monument, is located in Central Java, Indonesia, and was constructed in the Javanese Buddhist style during the reign of the Sailendra Dynasty in the 9th century.

However, the gradual Javanese conversion to Islam and concurrent decline of the Hindu Kingdoms led to the temple being abandoned in the 14th century. After laying hidden in the jungle under layers of volcanic ashes for hundreds of years, it was finally (re)discovered in 1814 by Sir Thomas Stamford Raffles during the British rule of Java.

This extraordinary UNESCO Heritage site is aligned with two other temples, Mendut and Pawon. They are located in a sacred area, according to a local myth and the whole site is designated as the Borobudur Temple Compound, which serves as a shrine and pilgrimage site, attracting Buddhists and non-Buddhists alike.

Borobudur Temple is built out of lava stone in a square shape, with four entry points and nine platforms on three different levels, topped by a central dome. As symbol of a spiritual journey the three levels represent the three “realms” of Buddhist cosmology, namely Kamandhatu – the world of desires (1st to 2nd floors); Rupadhatu – the world of forms (3rd to 7th floors); and Arupadhatu – the formless world (8th to 10th floors).

One can explore the temple from the base to the top via a system of stairways and corridors, the walls of which are decorated with narrative relief panels. The temple also has 73 bell-shaped domes pierced by decorative openings, each containing a statue of Buddha.

In total, Borobudur is decorated with 2672 relief panels and 504 statues of Buddha, which means the temple has the largest and most complete collection of Buddhist reliefs in the world.

The Magical Sunrise at Borobudur

I visited Borobudur Temple in the middle of February 2017.

The weather in Java is very variable at that time of year, with periods of rain and sun. As I went to bed the previous night, it was raining very hard and I didn’t think I would see the sunrise the next day.

But luckily when I woke up, the weather was much better.

It only took 10 mins by car from my hotel, Plataran Borobudur, to the Manohara Hotel Borobudur, and at 4:30 AM I met my guide, Budi Lenono, from Backstreet Academy to do the Borobudur Sunrise Tour.

Armed with flashlights against the darkness, we left the hotel for the temple, where we climbed the stairs to the top. The whole area was covered with a thick fog, due to the fact that Borobudur is situated on an elevated area between two volcanoes and two rivers.

Up at the top of the temple, the atmosphere was incredible. I felt filled with positive energy as it slowly became lighter. Minute by minute, the temple revealed itself and the mist started evaporating, unveiling the sublime surroundings – dense, lush vegetation and the mountains and volcanoes that surround Borobudur.

I felt moved just watching the mist lifting up gradually to the sky and sometimes I even had goose bumps. It was one of the most magical moments of my trip to Asia. 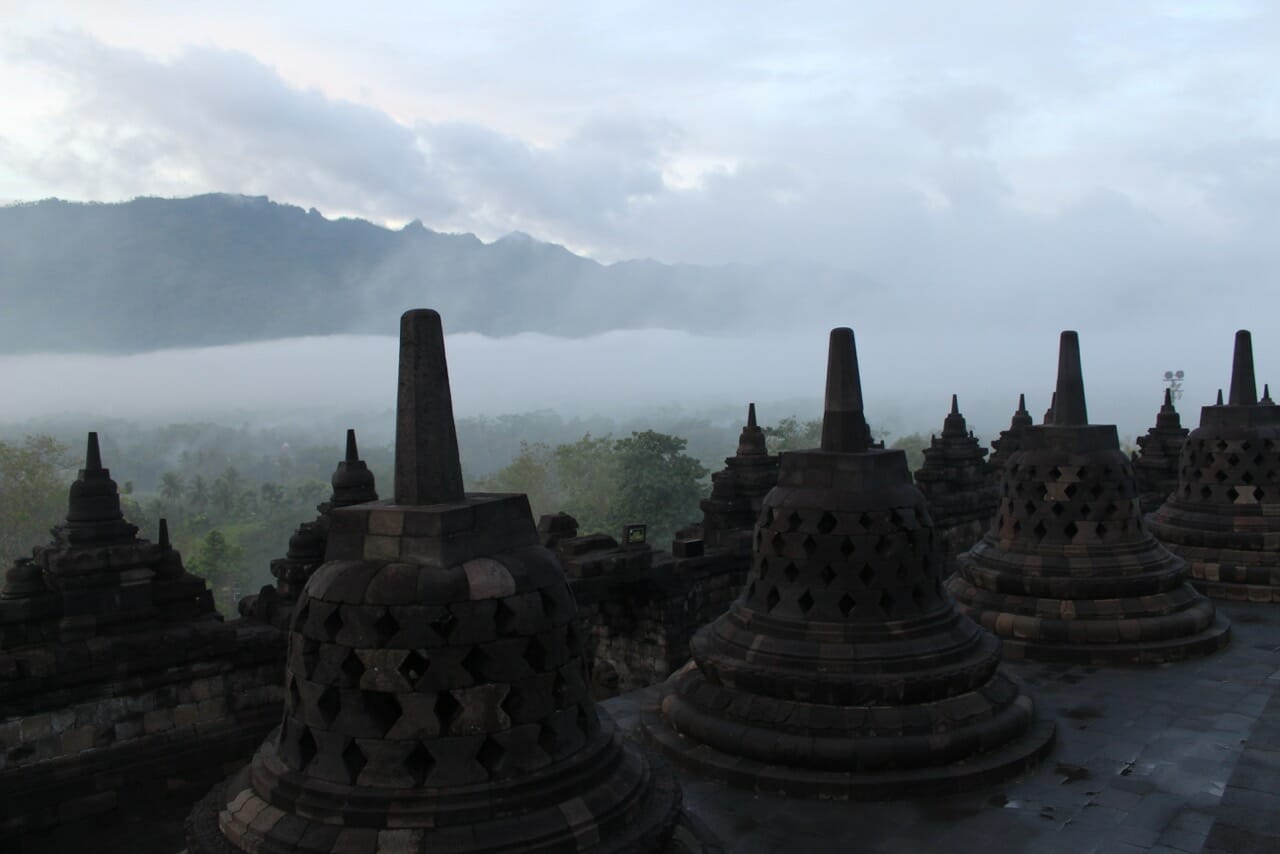 Finally, the sun rose up among the clouds and volcanoes but just few minutes later it was hidden again in the clouds.

I had not yet seen or learned anything about the temple, but just seeing the Borobudur sunrise was completely worth it, remarkable and unforgettable. 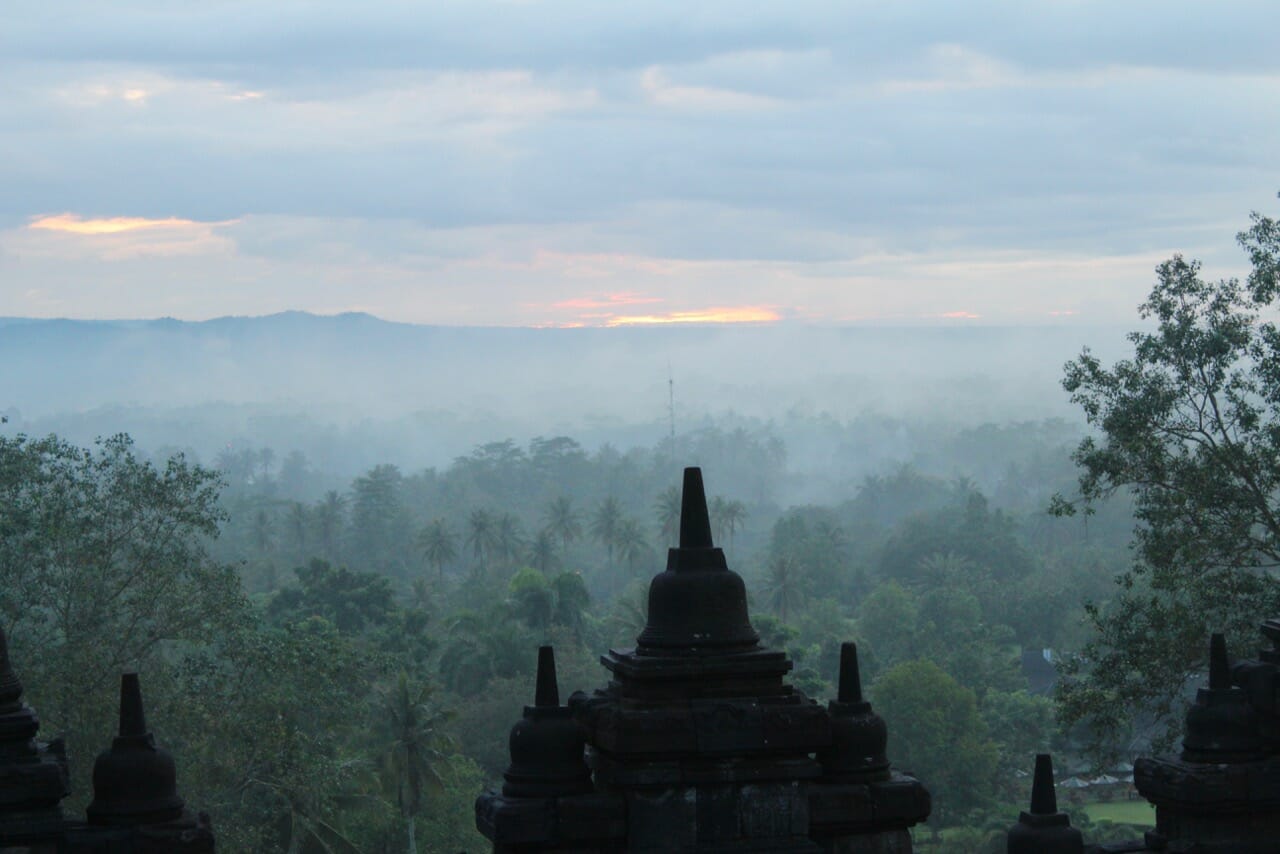 With the sun now out and Borobudur illuminated, it was time to explore the pyramid-shaped temple with the help of my knowledgeable and funny guide.

Budi showed me hundreds of carved relief panels that ranged from depictions of daily life in ancient Java to illustrations of Buddhist beliefs and the biography of the Buddha. I was thrilled to discover stories and facts that I’ve never heard before, precisely on this site that was constructed as a beacon of Buddhist teaching over 1200 years ago.

The tour took around 3 hours, and after Budi left, I remained, taking more pictures and witnessing a religious ceremony that was taking place.

Watching the Borobudur sunrise was a unique opportunity to not only travel back in time to the ancient era of Hindu and Buddhist Kingdoms but also to see the spectacular surroundings. As the greatest masterpiece of an era marked by magnificent monuments and religious devotion, it’s easy to see why Borobudur Temple is the most visited tourist attraction in Indonesia.

Borobudur is located on he island of Java, approximately 40 kilometers (25 mi) northwest of Yogyakarta and 86 kilometers (53 mi) west of Surakarta (check map here).

∗ From Jakarta to Borobudur

Borobudur is located around 500 Km (310 mi) from Jakarta, and the best way to get there is flying to Yogyakarta. Some of the companies that fly from Jakarta to Yogyakarta are: AirAsia, Lyon, Batik Air and Garuda Airlines. Tickets can be as low as US$ 20.

You can book your tickets with Skyscanner or Momondo, which are the websites that I use and trust.

∗ From Yogyakarta Airport to Borobudur

Borobudur is around 1:40 drive from Yogyakarta Airport, and the easiest way to get there is by joining a tour or renting a car.

If you will stay in a hotel in Yogyakarta, taxi will cost around 250,000 rupiah to your hotel.

∗ From downtown Yogyakarta to Borobudur

Borobudur has a tropical rainforest climate – hot, humid and quite wet all year round. There are to distinctive seasons: dry season (from April to October), and the wet season (from November to March).

So, anytime during the dry season is good, but be aware that there will be more tourists and the weather is going to be hot.

I would say that the best time to visit Borobudur is June or October when the sky is clear, and there isn’t rain and haze.

You can book your Sunrise Tour with Backstreet Academy and they will arrange everything (guide + Manohara Hotel special pass, and even transportation if you need).


If you’re planninga trip to Indonesia, you may also be interested in:

– Plan your trip in advance, to get better airlines and hotels rates.

– There are other two options to see Borobudur at dawn from Dagi Hill and Puthunk Setumbu, but many people say that isn’t worth it.

– If you visit Borobudur Temple during the rainy season don’t forget a poncho, and during the dry season a hat, sunscreen and sunglasses.

– If you don’t want to see the sunrise at Borobudur, avoid visiting the temple in the middle of day because of the heat.

– It’s advised to cover knees and shoulders in order to visit the temple.