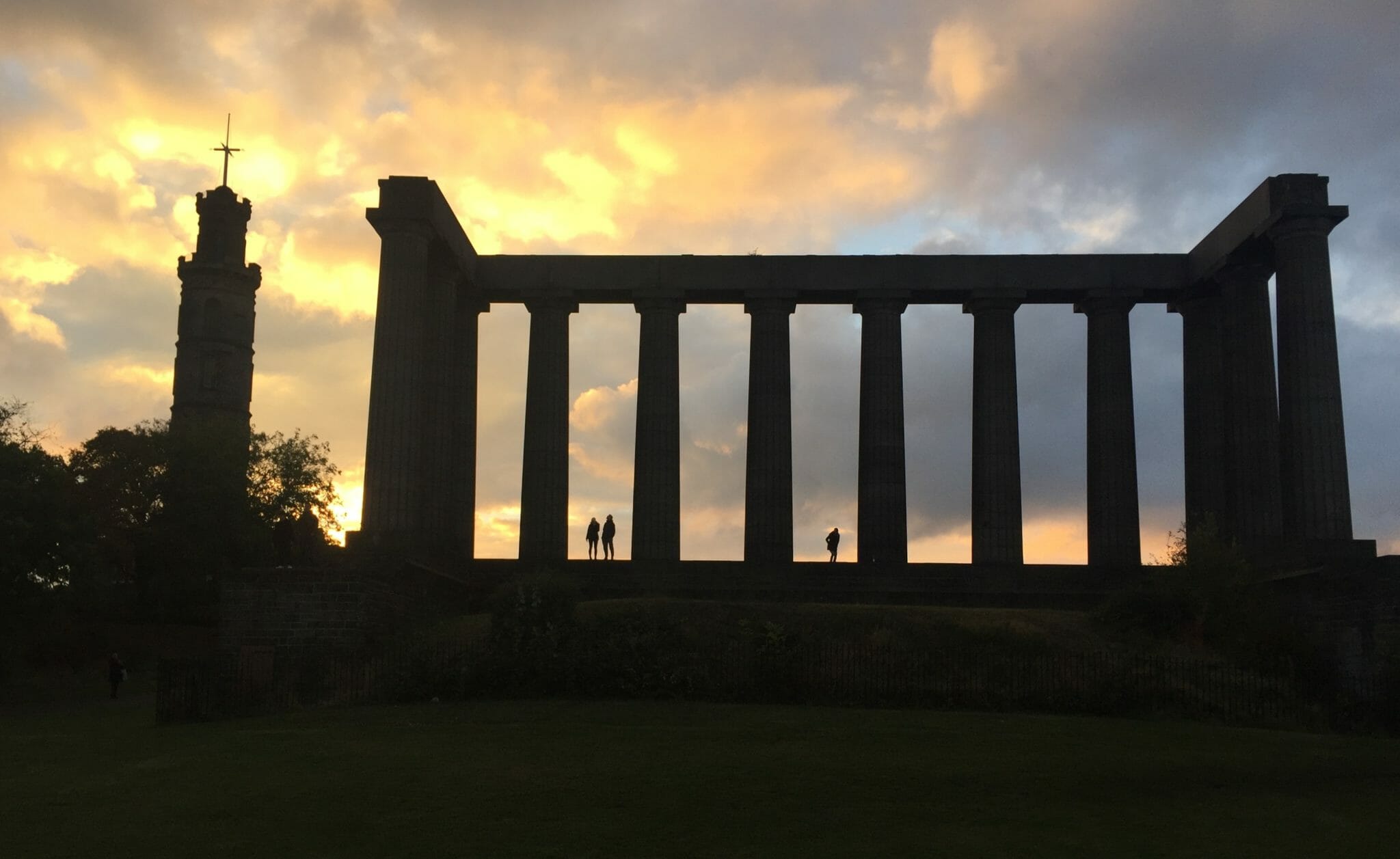 Things to do in Edinburgh? Here you find the 7 best ones 😉

I’d never thought about visiting Edinburgh until I had to do a project for my World Destinations class while studying Travel, Tourism and Hospitality Management. I became fascinated with this city and wondered if I would be able to turn this project on paper into reality one day.

Scotland’s capital is Britain’s second most popular tourist destination and considered one of the most beautiful European capitals. Edinburgh actually comprises two cities, the Old Town and the New Town, which were declared a UNESCO Heritage Site in 1995.

In October of 2016, two years after I did my project, I had the opportunity to go to Scotland for the first time and visited Edinburgh and Loch Ness.

I went not just to the places I covered in my project, but also discovered many other excellent places and things to do, so I decided to put together a list of what I think are the 7 best things to do in Edinburgh that fits perfectly on a 2-day itinerary.

7 Best Things to Do in Edinburgh

1 – Wander around the Old Town

The Old Town of Edinburgh is a labyrinth of narrow alleys and rows of houses, and home to some of the most popular tourist attractions in the city, such as the Edinburgh Castle and the Royal Mile.
Wandering around the Old Town’s streets, “closes” and hills will transport you back to the time when Edinburgh was a medieval burgh, and leave you enchanted by its beauty.

I loved exploring the Old Town and can confess that I got lost a couple of times… However, I found treasures such as Laid Stair’s Close and the charming Writer’s Museum, the Grassmarket area, The Mound and George Heriot’s school.

Wandering around the Old Town whether during the day or at night is the first of my best 7 things to do in Edinburgh.

Edinburgh has one of the best examples of urban structure in Europe, and it’s the perfect place for lovers of architecture.

While the New Town is predominantly Georgian, there are buildings in the Medieval, Romanesque, Renaissance, Gothic, Scottish Baronial, Greek, Neo-classical and Modern styles spread out all over the city.

Whether you’re walking in the Old or the New Town, you will spot some astonishing monuments and buildings. Like the imposing Scott Monument, a Victorian Gothic monument and the largest monument to a writer in the world; or Saint Giles Cathedral with its outstanding crown spire on the tower; or The Head Office of the Bank of Scotland at The Mound, one of the most famous and picturesque hills; or Donaldson’s School. This former school and hospital was built in the Tudor style and was reportedly considered by Queen Victoria to be more impressive than many of her own palaces.

And these are just a few examples – I couldn’t stop taking pictures of the striking architecture when I was there, and this is the second best thing to do in Edinburgh.

3 – The Palace of Holyroodhouse and Holyrood Abbey

The Palace of Holyroodhouse is The Queen’s official residence in Scotland and has long had a central role in Scottish history.

Located at one end of the Royal Mile, this spectacular building was originally a medieval monastery before being taken over by King James IV in the early 1500’s to be used as a royal palace.

You can visit the State Apartments, which are regularly used by The Queen and members of Royal Family to receive and entertain guests; the Historic Apartments of Mary, Queen of Scots; the 4-hectare Palace Gardens; and the dramatic remains of Holyrood Abbey Church, where many important royal ceremonies, including coronations, were held. There is also a café in Mews Courtyard and The Palace Shop, where you’ll find exclusive souvenirs inspired by items in the Royal Collection.

What I liked most about my visit was the fact that The Queen still holds ceremonies there, and seeing the ruins of the awe-inspiring Holyrood Abbey.

I was speechless walking in the nave of this abbey!

Located in Holyrood Park, Arthur’s seat is Edinburgh’s highest hill and was formed by an extinct volcano over 350 million years ago.

It’s distinct shape and elevation is covered by grass in different shades of green, ocher and grey.
The hike is suitable for everyone, as it’s relatively easy, takes around 30min and provides unparalleled panoramic views of Edinburgh.

I went Hiking Arthur’s seat at sunrise via a short route, but there are many options to reach the summit that stands 251m (822 ft) above the city.

Hiking Arthur’s seat should be on everyone’s list when visiting Edinburgh because it’s a great opportunity to get a birds-eye view of one of the most beautiful European capitals, and admire the stunning landscape.
And of course this is one my 7 best things to do in Edinburgh!

5 – The Scottish National Gallery and the Portrait Gallery

Scotland’s capital has world-class museums and visiting some of them is one of the best things to do in Edinburgh.

My favorite is the Scottish National Gallery, which houses a sensational collection of fine art that spans a period from around 1300 to the early 20th century. You will find wonderful paintings by Scottish artists along with works by Leonardo da Vinci, Vincent Van Gogh, and Goya, among others.

I had a blast visiting this museum and to be honest I was not expecting to see Leonard da Vinci and Van Gogh paintings there at all.

Another great museum is the Scottish National Portrait Gallery. The collection is good, the temporary exhibitions are amazing, and the Neo-gothic building in red sandstone is absolutely breathtaking, from inside and out.

And the best things it’s free entrance for both museums.

6 – Dine at the best restaurants in town

As many other metropolis Edinburgh’s food scene boasts an array of restaurants, from Michelin-starred fine dining to cheap and joyful curry houses. So one of the best things to do in Edinburgh is definitely dine in at least one of its best restaurants.

During my visit I went to two that are considered the best restaurants in town, and the food was beyond my expectation.

The first was 21212, the only Michelin-starred restaurant with rooms in the city, is set in a beautiful Georgian townhouse and it’s exactly what you can expect from a high end restaurant: sumptuous and relaxing atmosphere; distinguished service, with waiters giving an explanation of every dish; and an absolutely divine food.

Another excellent restaurant is Ting Thai Caravan, which is a perfect example that good doesn’t have to be expensive. It has a very simple and welcoming atmosphere, and servers a hearty street food menu of thoughtful innovations and taste combinations. Its chef used to cook for the Thai’s king, and actually this was the place that I had the best Thai food outside of Thailand.

7 – Watch the sunset at Calton Hill

Edinburgh is nestled among seven hills and some of them provide extraordinary views of the city.
Of those hills, Calton Hill, located beyond the east end of Princes street, is undoubtedly my favorite. With its five monuments, the City Observatory, the old Royal High School and the Regent Gardens, it’s a must-visit while you’re in Edinburgh.

Because it’s situated in the city center, this is the perfect spot to watch the sunset, especially from the site of the Dugald Stewart Monument. From here, you can see the Castle Rock, the Balmoral Hotel, Saint Giles’s distinctive Crown Steeple, the Scott Monument and many other church towers and landmark buildings that form part of Edinburgh’s skyline.

I was in awe watching the sunset at Calton Hill and this is my favorite of the 7 best things to do in Edinburgh.

Many people consider the castle one of the best things to do in Edinburgh, and I really recommend you to visit it.

You can check my three-day itinerary for your trip to Edinburgh, which is more comprehensive and provides tips for accommodation and restaurants.

Edinburgh is a perfect example of the many places to visit in Europe that are off the beaten path. I’m glad that I included this city in my project and had a chance to visit it.

Edinburgh, the capital city of Scotland, is located in Southern Scotland on the East coast (Map here).

∗ There’s an international airport in Edinburgh which is very well connect with many European capitals and other cities around the world. Some of the airlines are: RyanAir, EasyJet, British Airways, Flyby, Emirates , Delta and TAP. From the airport you can take the tram to the city center.

∗ There are also trains from London and other cities in the UK. You can check the National Rail for more info.

∗ The cheapest way to get to Edinburgh is by bus, and some of the companies are: MegaBus, National Express and CityLink.

You can visit Edinburgh all-year around, but keep in mind that January is the coldest month, October is the month with most rain fall and the driest months of the year are in spring and early summer.

August is considered by many people the best month to visit Edinburgh because of the festivals that happen in the city and also the days are longer and the weather is good. However this is also the busiest month so accommodation tend to be more expensive.

If you want to avoid the crowds you can go from April to June.

I stayed at The Principal Edinburgh George Hotel and you can read the review here. If you’re looking for accommodation, I could also suggest some of the hotels listed below:

Tickets, Tours & More things to do in Edinburgh

3 thoughts on “7 Best Things to Do in Edinburgh”