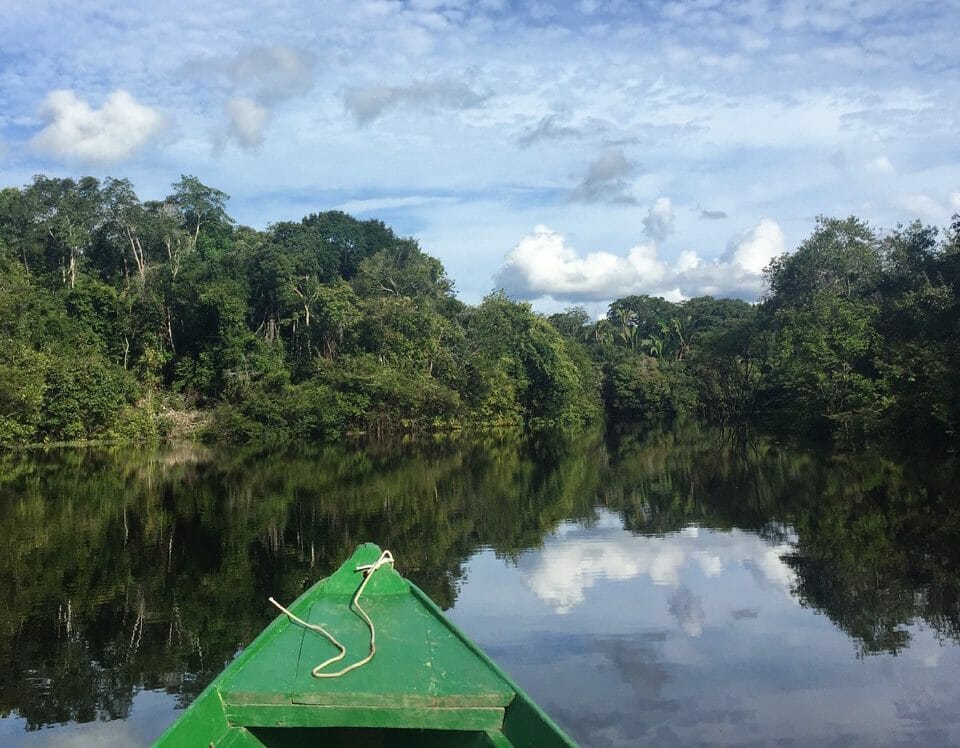 I was dying to get into the Amazon Rainforest, after spending some days in Manaus.
Unfortunately Brazilians don’t give too much importance to the Amazon Rainforest in terms of tourism. We prefer Rio and the beaches in the Northeast and underestimate the biggest forest in the world.
There are many options to spend some days in the forest, from luxury lodges to how to survive in the jungle tours. I picked a three-day two-night package with Iguana Tours because the price was really good and there were plenty of activities.

To get into the lodge located around 120 km from Manaus, they picked me up in the hostel at 8:30AM. The journey took 30min on a speedboat, plus a one-hour drive and 30 more min on a small boat.
The weather that April 10th of 2016 was terrible, the sky was completely dark and the rain was pouring. I did not feel like leaving the hostel at all!
Luckily after the van drive the rain had stopped. The landscape changed a lot: we were on a branch of a river full of trees with few boats with a cloudy sky that made for idyllic scenery. I was already feeling grateful for taking this time out of the city and finally getting into the Amazon Rainforest.
Four European guys in their 20’s, a US couple in their late 50’s and I hopped aboard a small boat heading toward our lodge. Huge and incredible trees surrounded the river. From this point on there was no more cell phone coverage or Internet; we were alone with nature at its best.
The lodge located by the river was very simple, and although the accommodations were on land, the restaurant and a socialization area with tables and chairs were on a floating platform.

The first activities: watching the pink dolphins, sailing on the river and fishing were scheduled for that afternoon. I asked our guide to leave an hour early so we could enjoy more of the forest and also to find a huge samaúma, Ceiba Pentandra,  (a typical tree from the Amazon Rainforest).
The dolphins were everywhere on the river. Some of them were grey, and the guide explained that they came from the ocean and adapted to the river, and very few were pink, the pink dolphins are natural for this environment. There were so many dolphins and they were swimming very close to our boat and we even saw them jumping. What a reception!
We stopped for piranha fishing, a kind of fish that exists only in the Amazon Rainforest. Our guide, Chilton said that there are 23 species of piranha and only 8 of them are carnivorous. Well, if we used fish to catch piranhas I assumed that we were only interested in the carnivorous ones.
I was never good at fishing and after 30min everyone had caught at least one, I finally caught mine. Finally!

We started sailing again, this time searching for the huge samaúma. After around 30min we stopped and went into the jungle. We found one tree of around 200 years old and I believe it would take at least fifteen people to hold hands and completely surround it. I was impressed and feeling truly thankful. 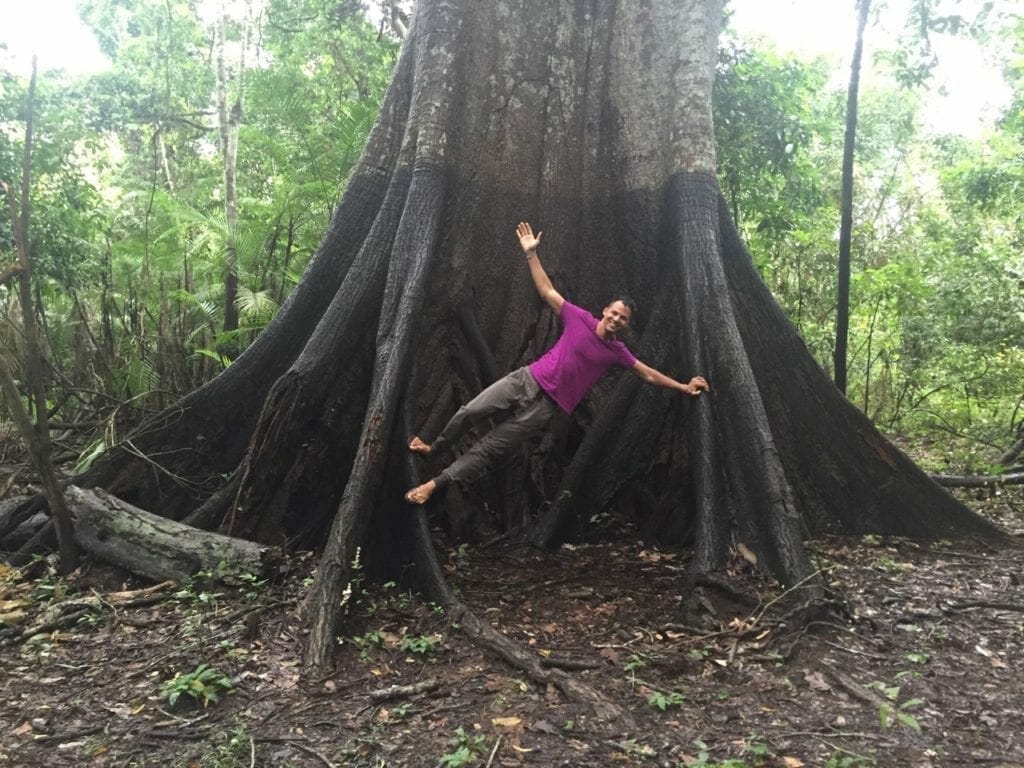 On the way back I can confess that I was kind of bored sailing for around an hour, but in the end I appreciated the Amazon Rainforest’s beauty.
We watched the beautiful sunset on a lake close to the lodge with more dolphins swimming close to us. What a gift of nature! 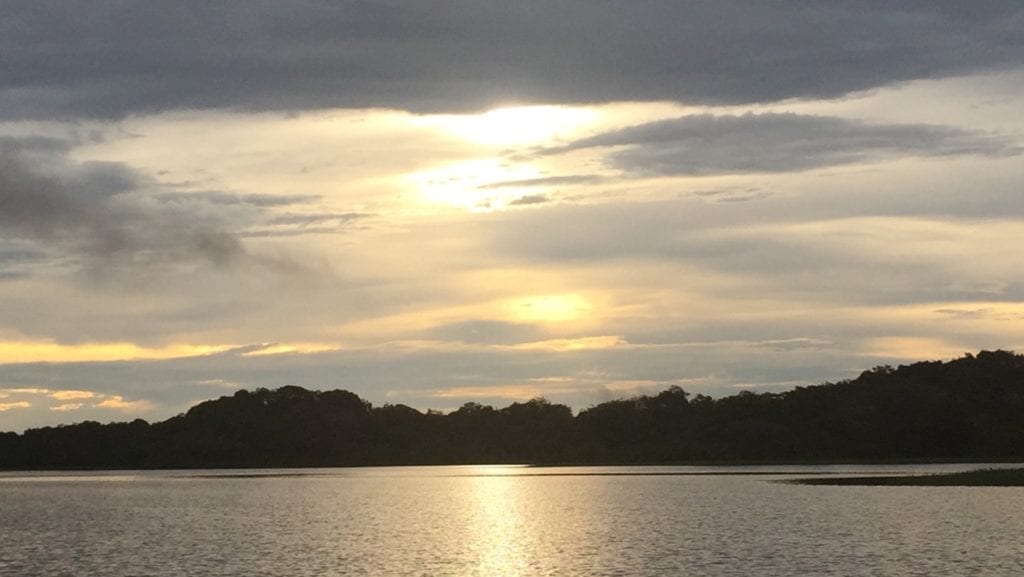 At night after the dinner we went to a caiman spot. The boat just crossed the river in the complete darkness. Chilton laid down over the boat with a flashlight and the boat guy stopped close to some aquatic plants and seconds later he rose with a caiman in his hands. I never thought it would be so fast and “so easy.”
We went back to the floating platform and he explained the difference between the three kinds of caimans found in the Amazon Rainforest. The spectacled baby caiman was between two and three years old and was almost 1m long.
After, everyone took a picture with the caiman they left to go to their rooms. I stayed by myself in the darkness staring at the stars. If it were not because of the mosquitoes and the uncomfortable chair I would’ve slept there…

The next day we woke up at 5:30 to see the sunrise. We took the boat out but it was overcast and the sun didn’t show up. We returned, had breakfast and finally went hiking into the jungle.
We made several stops to learn interesting facts about the Amazon. The first was about a medicinal tree rich in iodine. At the same stop Chilton caught a huge ant that some tribes use to baptize the young guys to become an adult. He said that the ant bite hurts for 24 hours and gives you a headache and makes you vomit, etc. Poor brave indigenous teenagers!
We continued and he found antibiotic plants that are used against malaria, palms used to make roofs, rosewood and trees used to make bracelets, collars and ropes. He even found a larva inside a babaçu coconut that the natives eat. Chilton said that it tastes like coconut and I had to try it. It did taste like coconut because the larva only eats coconut, but I confess that chewing a larva was very weird and unpleasant…
A very curious and challenging stop was in front of a huge Brazilian nut tree (Bertholletia excelsa). There was a big ant’s house and our guide said that these ants are used as a repellent. The only thing is that you have to put your hand on the house and wait for the ants, then rub them on your hands. I tried it and it was kind of annoying seeing all the ants so thick on my left arm so I rubbed them so fast. I wondered how they found those things in the first place… How knowledgeable are those people from the Amazon, OMG.
We hopped on the boat again and the weather was just perfect. After the high humidity of the jungle, the breeze made me feel good and fortunate.

Back to the lodge for an unbeatable lunch: the food (beans, rice, fish and salad was tasty), but the dolphins playing so close to the lodge was just priceless.
We had a 3h break, that didn’t make me feel so happy, but I ended up sunbathing and taking a nap on one of the chairs. It was very relaxing though.
Around 3:00 PM we left for the big adventure: camping in the jungle. The boat was filled with our hammocks, water, some food and fishing gear. We sailed around 30 min and arrived at the camping place, which was very close to a riverbank, under a tall and beautiful tree.
We set up our hammocks under the covered area and left to get some wood to make a fire.
We went piranha fishing again, this time to prepare for dinner, but it seemed like the fishes were running away from us. We caught only two and had to change places at least four times… However when it was getting darker I finally caught not only one, but four piranhas.

At night we spent time cooking, talking and getting to know each other better under the dark sky. It was very good and pleasant and the mosquitoes did not bother that much. The chicken rice and piranha were very good! I’ve never ever in my wildest dreams thought that one day I would be camping in the Amazon Rainforest and eating piranha that I caught on my own…
Around 10:00 PM we went to bed, I mean, the hammock, with all the animals: ants, birds, monkeys, squirrels, spiders… I felt I would not be able to sleep but I did, even without a mosquito net. At 3:00 AM everyone woke up: the rain was pouring. Despite the heavy rain our camping was completely fine.

The rain lasted at least five hours and by the time we left it had already stopped. We went to visit a family who lives by the river. When we got there one of the family members had just come back from fishing and was cleaning the two big fishes on the river with a child as a helper. The family is composed of 14 people, most of them women. They live in a very simple way: sleep in hammocks, go fishing and farm and sell art and crafts. When I asked if they prefer the city or the country they didn’t hesitate to answer the country. “It’s more relaxing, and there is no violence and noise”. They were very friendly and humble.

We took some pictures, the guys got some art crafts and we went back to the lodge. After lunch the rain started pouring again. I was so frustrated that I hadn’t jumped into the river yet, and although it was my last chance, all I could do was watch the rain coming down.
But I would not leave without getting into the water. So, I put my swimming suit on and jumped in the river. The guys were saying to watch out for the caimans and piranhas, but I was not worried at all and just wanted to enjoy it. The water was so warm and I felt amazed.
We sailed all the way back to Manaus in the rain. When I arrived in the city I felt so weird… like I didn’t belong to this place… Now I understood why the locals prefer to live by the river.
These few days in the Amazon Rainforest reinforced my passion for nature and taught me that sometimes we need to just unleash ourselves, to relax and go with the flow, and also to appreciate every experience we have in life because it’s unique.

Ver video: Into the Wild: Three days in the Amazon.

The city of Manaus is the getaway to the Amazon Rainforest in Brazil (check map here).

∗ By airplane: Sadly there aren’t many international companies flying direct to Manaus. Some of them companies are: American Airlines, Copa Airlines and Insel Air.
Although there are plenty of flights from several cities in Brazil, specially from São Paulo and Brasília. The companies that fly frequently to Manaus are: TAM, Gol, Azul and MAP.

∗ By boat: there are many boats connecting Manaus with other cities in the North of Brazil, and also with Colombia and Peru. Those boats are huge and you sleep in a hammock (you have to buy it).
To Colombia and Peru it takes in general one week. One of the most common trips is from Manaus to Belem (Pará’s capital) and it takes three and half days.

There are basically two seasons in Manaus: the rainy and high humidity season (from December to April), and the dry and very hot season (from July to September).
So, the best time to go is the shoulder season: May/June and October/November.
I was there for seven days in the beginning of April of 2016 and four days the weather was sunny and hot, one cloudy day and two days with heavy rain.

∗ Take the yellow fever vaccine te least ten days prior to arrival.
∗ Avoid using black/dark clothes in the jungle because of the mosquitos.
∗ The guide told me that in July there are a lot of mosquitoes.
∗ Bring long sleeves, hat, mosquito repellent and waterproof shoes and clothes.
∗ In times of high (January to June) and low (July to December) tide, the difference in water level is up to 15m.