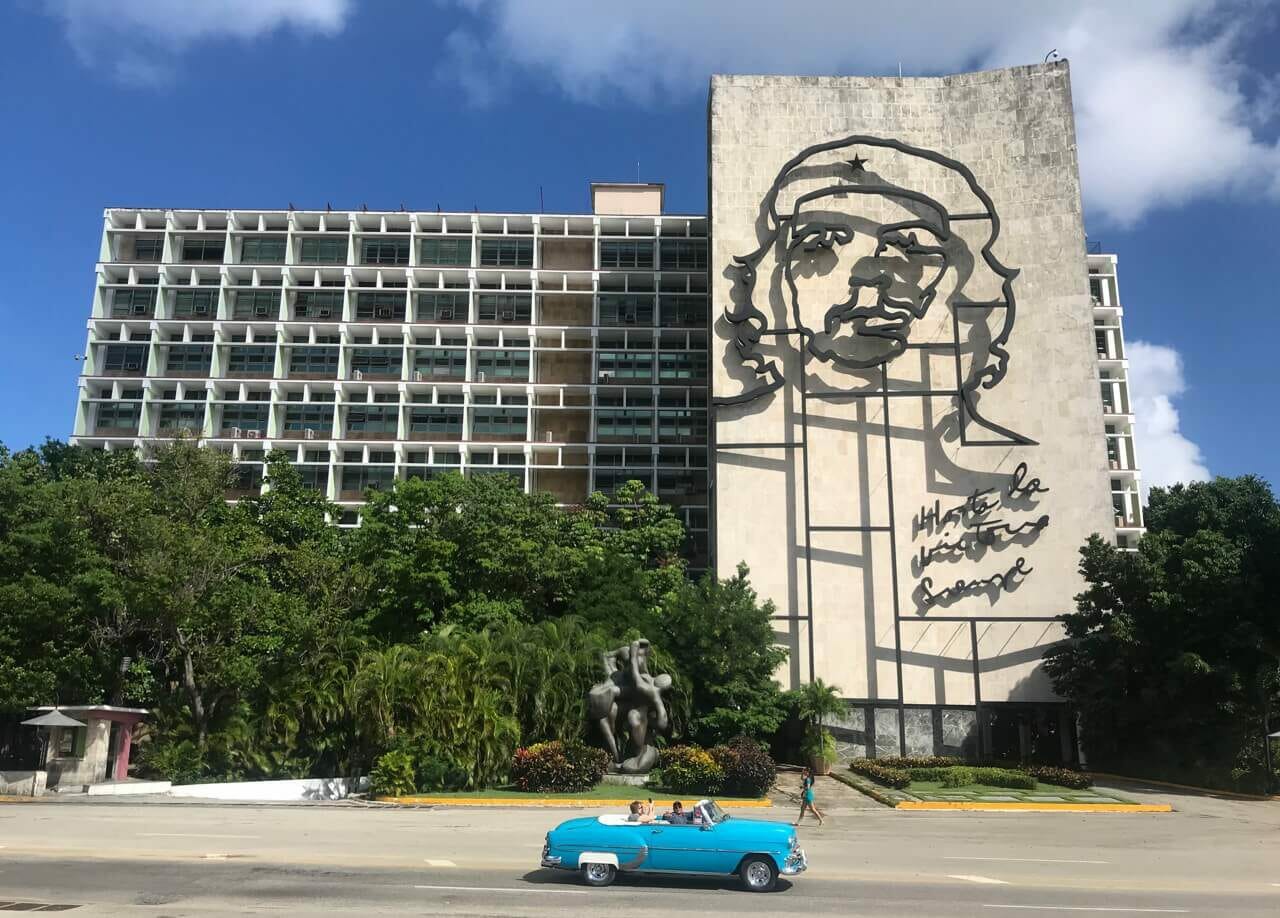 Havana was the first city that I visited during my 20-day trip to Cuba. As soon as I arrived, it felt like going back in time: vintage cars driving down the streets; old buildings – some preserved, some falling apart; no Internet in the airport or at home…

But visiting Havana is much more than traveling back in time. It’s an opportunity to learn about the history of Cuba, particularly the Cuban revolution and the período especial; understand how Cuban people live; and witnessing their extremely passion for music and dance.

There are many things to do in Havana, and if you want to visit the most important points of interest in Havana, your two / three-day itinerary will be filled with exciting places to visit and extraordinary things to see.

That’s why I decided to make a list of the 7 top things to do in Havana with the best experiences you can have in the city and get the most out of your trip.

7 Best things to do in Havana

There isn’t a better way to go sightseeing and learn about the history of a city than taking a walking tour. And if it’s free, it’s even better.

I try to take a free walking tour everywhere I go, and in Havana it wasn’t any different.

I loved this walking tour and learned a lot about the fascinating history of Cuba.

Without any hesitation, the free walking tour is on the top my list of the best things to do in Havana!

Habana Vieja (Old Havana) is the most famous and touristy part of Havana.

Founded in 1519 by the Spanish and located within the extent of the former city walls, it was built in the baroque and neoclassic styles and was declared a UNESCO Heritage Site in 1987. Although many of the original buildings have burned and fallen down, Old Havana still exhibits the pattern of the early urban setting with narrow streets, a mix of Baroque and neoclassical monuments, and private houses with arcades, balconies, wrought-iron gates and internal courtyards.

Wandering around the streets of Havana Vieja, you will know you that you’re in Cuba and nowhere else in the world. Restaurants playing Cuban music, people dancing salsa on the streets, ladies dressed colorfully, buildings falling apart, people shouting out in Spanish… you can’t miss it as it’s one of the best things to do in Havana.

It’s my favorite part of the city and there are many things to do in Havana Vieja and some enthralling places to visit. Some of them are: calle Obispo (at the end of this street there are restaurants with live music and people dancing on the street), Plaza de la Catedral and Catedral de San Cristóbal, Plaza Vieja, Cámara Oscura, the Museum of Revolution, Plaza de Armas, Hotel Ambos os Mundos (to have a piña colada at the rooftop), San Franscico de la Habana Basilica and El Malecón.

Almendrones are the vintage cars from the middle of the 20th century that are everywhere in Cuba as a reminder of the pre-revolution period. And they are generally big American cars: Dodge, Chevrolet, Plymouth, Ford and Packard.

Although Cubans use those cars as “regular” taxis, tourists are charged a much higher fee for a 1 ½ hour tour around Havana. The cars used for these tours are more beautiful and much better preserved and equipped than the “regular” taxis, so it’s totally worthwhile paying US$ 30 for the tour.

I was dying to get a ride in a vintage car the moment I arrived in Havana. There are so many gorgeous almendrones that it is impossible to resist and not take several pictures.

I recommend taking this tour at the beginning or the end of the day, because of the heat. And even though some people consider it too touristy, it’s one of the best things that you can do in Havana.

After all, where else in the world will you get the chance to take a city tour in a stunning vintage car??

4 – Get the best view of Havana at Grand Hotel Manzana

If you’re wondering where you can get the best view of Havana, my answer is: from the Grand Hotel Manzana Kempinski.

The five-star hotel opened in 2017, and is located in a magnificent neoclassic building built between 1894 and 1917 as the first European style-shopping arcade in Cuba.

Situated in the heart of Old Havana, it provides an unobstructed view of two of the most beautiful buildings in Havana: El Capitolio and the Grand Teatro de la Habana. It’s also possible to admire the Parque Central from above, see many attractive colonial and neoclassic buildings, and admire the spectacular views of the old city.

The rooftop bar and restaurant are open to the public and drinks reasonably priced.

During my four days in Havana, I visited two museums: the Revolution and the Napoleon. The Museum of the Revolution is good, especially if you take a guided tour. But Museu Napoleónico it’s the one on my list of 7 best things for vacation in Havana.

The Napoleon Museum houses the most important Napoleonic collection in Central America and it’s set in a superb Renaissance-style mansion built in the 1920’s.

What I liked most in Museo Napoleónico, besides the fact that it has one of the most important collection of objects linked to the life of Napoleon outside of France, was the furniture, particularly some tables and chandeliers, and the rooftop that provides a great view of the city.

Even if you are not familiar with the American writer, journalist and Nobel Prize winner, Ernest Hemingway, when in Cuba, particularly in Havana, you’ll hear about him very often. Hemingway had a permanent residence in Cuba in the 1940s and 1950s, and wrote seven books during his stay there, including The Old Man and the Sea, which made Hemingway an international celebrity, and won the Pulitzer Prize in May 1952.

One of the places that Hemingway used to visit was El Floridita, a bar opened in 1817, which is considered to be one of the best bars in the world.

It’s said that Hemingway, a habitué of El Floridita (there’s even a bronze statue of the writer there), changed the daiquiri recipe, and the bar kept the recipe secret ever since. As a result, it’s the best daiquiri you will ever have. The ice doesn’t melt, the measure of alcohol is just right, resulting in a cocktail that is a bit dry, unsweetened and very smooth.

I confess that I’m not a big fan of alcohol but I tried daiquiris in several bars in Cuba and never found another one as good as the one in El Floridita. The price is higher than the ones found elsewhere (around US$ 6), but it’s worth it as it’s the tastiest daiquiri in Cuba, and one of the best things to do in Havana.

El Floridita is located at the corner of Calle Obispo and Monserrate, in Havana Vieja, and it’s open everyday from 11:00 AM to 12:00 PM.

7 – Enjoy the best night out in Havana at FAC

Havana, the biggest city in Cuba, with a population of over 2 million people it’s known for having the best nightlife in the country. So if you’re looking for things that you can do in Havana at night you won’t be disappointed. La Zorra y El Cuervo Jazz Bar, King Bar (loved it), El Divino (only on Saturdays), Sia Kara Cafe, El Gato Tuerto and La Bodeguita del Medio are some of the places you can go.

But the best night out and coolest place to go in Havana is undoubtedly FAC (Fábrica de Arte Cubano). Located on a former cooking oil factory building constructed in 1910, this thriving art gallery and club opened in February 2014 and attracts locals and tourists alike.

Apart from having an art and photographic gallery, a dance floor, a cinema, bars, restaurants and a space for live concerts, FAC is a project that aims to reclaim and promote Cuban artists from different disciplines.

I must say that I adored everything in FAC! The building, the entrance price (only US$ 2), the exhibition spaces, the exhibitions, the cinema that converts into a dance floor, the live concert, the mixed and interesting crowd, the outdoor areas and the cheap drinks.

If you have only one night in Havana, FAC is the place to go.

Other Things to do in Havana

This is my list of the 7 best things to do in Havana, but other points of interest you might consider visiting are: the Revolution Museum, Castillo de la Real Fuerza (one of the first fortresses in the Americas), Paseo del Prado, Castillo del Morro, La Cabaña Fortress, the Rum Museum, Calejon de Hammel, the National Musuem of Fine Arts and San Salvador de la Punta Fortress. Havana is a bustling and exciting metropolis and if you follow these tips you will understand why it’s my favorite city in Cuba.
Safe travels and enjoy Havana 😉

To apply for a Cuban visa, you need a Travel Insurance. Get yours here with World Nomads, my personal insurance and the favorite one for independent travelers.

Planning a Trip to Havana, Cuba

Cuba is located on the Caribbean sea, close to Mexico, Jamaica and Haiti (check map here).

The best time to visit Havana is from December to April, to avoid the rains and occasional hurricanes.

The best thing to do in Havana is to stay in a “Casa Particular” because there aren’t many hotels, and most of them are expensive.

I rented a room at Mary House in Centro Habana. The two bedrooms apartment is located within 20min walk from El Caiptolio and El Malécon.

The 5 story building has a modern elevator, and the suite is very spacious and has AC, a comfy bed, hot shower and plenty of light.

You can contact the owner via email: [email protected]

My travel costs in four days in Havana:

Some of the Havana restaurants that I recommend are: El Cocinero (very close to FAC), La Guarida, Le Chansonnier (very good French restaurant), La Dichosa (on the corner of Obispo and Compostela), El Asturianito (in front of El Capitolio) and Doña Eutímia (you need to book a table in advance).

* When you travel to Cuba avoid bringing American dollars because there’s a 10% penalty. Take Canadian dollars instead once it’s the strongest currency (even more valuable than euro and pound).

* When negotiating with Cuban, always bargain, specially for transportation.

* It’s common to see Cuban people asking for clothes. So I highly recommend you to bring some clothes to donate, and also toiletry products.