If you like graffiti art, you will be amazed with some of the best graffiti murals is São Paulo!

It was two and a half years since my last visit to São Paulo, I returned at the end of August of 2015 and realized that the city was completely covered with graffiti.
I always knew that graffiti art was popular in Brazil, especially São Paulo, because there is a long history of people climbing walls and buildings to express themselves including gangs that use this form of art to challenge each other through signs, codes and tagging.
There were a few fine graffiti murals in Sao Paulo and some of them were even washed out by the government…

But this trip was different, there are beautiful and colorful graffiti murals in Sao Paulo scattered around the city, and some of them are really brilliant and breathtaking.
As a result, Sao Paulo had become a graffiti paradise and has some of the most vital and fascinating graffiti art scenes in the world.
The city is also the home of internationally renowned artists such as Os Gêmeos, Eduardo Kobra and Speto, who have been invited to exhibit their works worldwide in cities like: New York, Miami, Frankfurt, Dubai and Tokyo.

My first weekend in São Paulo I had a visitor from NYC and I decided to take him to some tourist sites. The weather was wonderful and perfect to go to Ibirapuera Park. From the car I could see that the city has basically every public wall and bridge column painted with graffiti, and to be honest I don’t really like it, however my friend loved it.
We arrived at the park and after walking around we decided to visit the Museu Afro Brasil, which was really nice.
We left the museum and continued our walk around the park when we suddenly saw the first mural with graffiti art, a stunning portrait of an indigenous child with a profound expression and lively hair. I was awe-struck by the quality and realism of the image and wondered what was the technique used by the artist to get this effect. My friend was amazed! 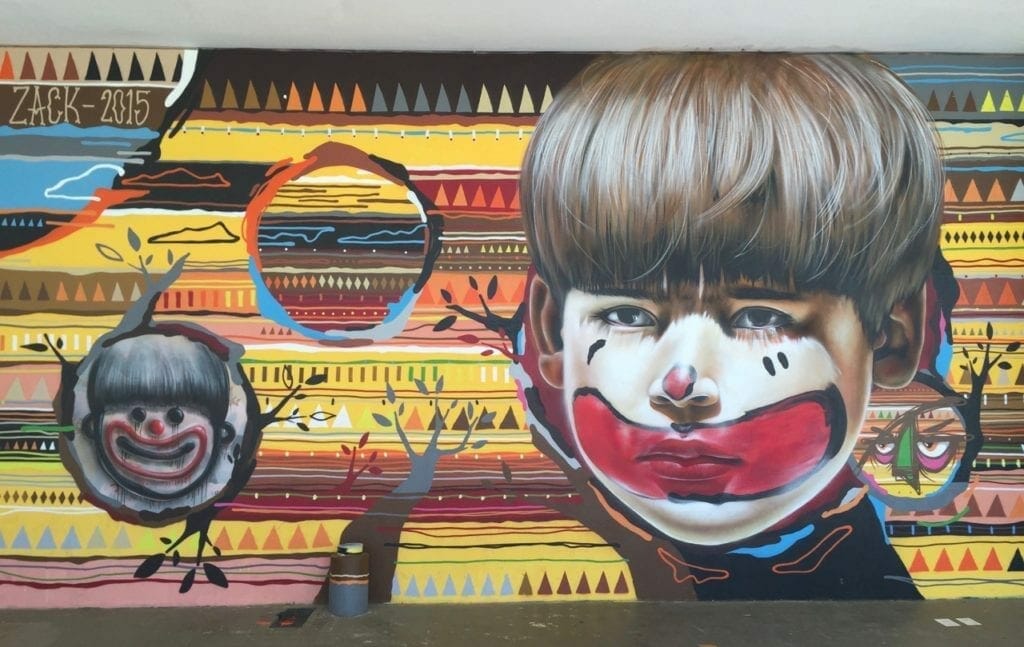 A few steps away and we bumped into another great piece of work, a colorful and vivid child full of joy and enchantment. The artist, Eduardo Kobra, used bright colors and bold lines, repeated triangles and squares, like a kaleidoscope, to depict and give life to this adorable portrait. Its profound eyes and lovely smile entranced me! When I left the park my view of the graffiti art in Sao Paulo had already started to change…

After a couple of weeks I had another friend visiting from NYC and invited him to visit Beco do Batman (Batman’s cave), a street with a dense concentration of graffiti art in a neighborhood called Vila Madalena.
Beco do Batman became a popular tourist destination and the favorite one for young people and Instagrammers. Of course when we arrived there some ladies were taking their pictures with make up on and a professional photographer to post on their Instagram accounts.

Looking for accommodation in São Paulo? Check this post from The Broke Backpacker and find out which are the best hostels in São Paulo.

The cobblestone street is impressively covered with graffiti on both sides with different colors and motives. The one that I liked most was almost at the end of the street where the artist plays with the branches of a tree on the top of a wall and paints a psychedelic tree with vibrant colors that you cannot distinguish what is painted and what is the real tree. It was thrilling and I also took the opportunity to snap some pictures to my Instagram account.

As graffiti is omnipresent in São Paulo and I wander around the city I keep bumping into captivating murals. Biking in the Pinheiros neighborhood I found another treasure made by Eduardo Kobra on the corner of Rua Sumidouro and Rua Fernão Dias, this time a mural with some artists who died at the age of 27 (the famous Club). Cobra used the same kaleidoscope technique to pay tribute to Amy Winehouse, Janis Joplin, Kurt Cobain, Jimi Hendrix and Jim Morrison.

Also in Pinheiros I bumped into a lovely portrait of two children, a black and a white one, smiling. Yet the reality of the their expressions and this mix of picture and graffiti art was what called my attention. Such a great piece of work! 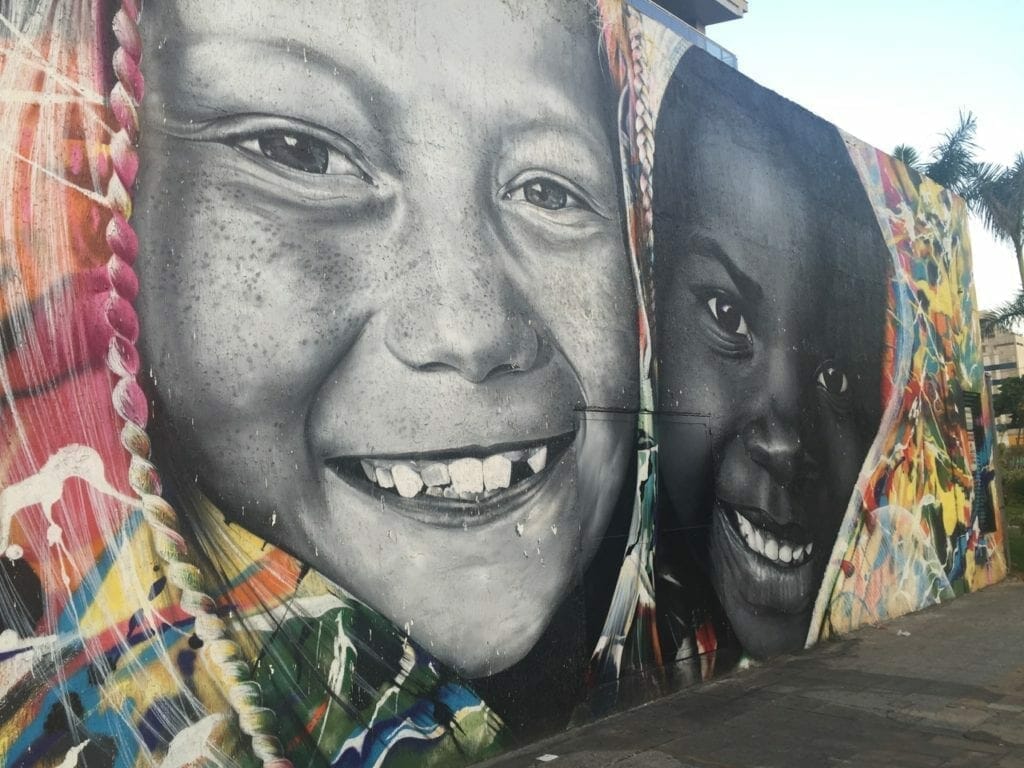 Finishing my bike tour I met two geniuses on the street: Frida Kahlo and Albert Einstein. Curiously Einstein’s mural, where he is also biking, tells the viewer one of his most famous and emblematic quotes: “Life is like riding a bicycle. To keep you balanced, you must keep moving.” It seemed like the artist decided to immortalize and represent this quote in just one image. What a great idea!

Back to the Ibirapuera Park, which is full of graffiti murals by the way, the one painted by Os Gêmeos on the entrance of MAM (Museum of Modern Art) stands out. This colorful and electrifying graffiti mural is also a masterpiece and just shows that the graffiti art in Sao Paulo is taken seriously.
There are many projects including the ones created by the government to cover the avenues and streets of São Paulo with graffiti murals and some of them even feature international artists.

If in the beginning I was shocked with the amount of graffiti art in São Paulo, day after day I was surprised by the quality of it.
São Paulo and its inhabitants have a strong relationship with the graffiti and it is not just a form of expression, but also part of their own culture.
Thanks to GPSmyCity we are able to find the exactly location of all those pictures listed on this post.
GPSmyCity makes popular iOS and Android apps that featured self-guided city walks in over 470 cities around the world. Each one of its app contains dozen of self-guided walking tours for a single city, and you can explore the city on foot at you own pace.
In partnership with GPSmyCity I’m giving away 10 promo codes for Full Version of City Walks Apps, one of the popular iOS and android apps by GPSmyCity.
10 lucky winners will receive promo codes, which will allow them to download full version of any city they want among the 470 listed on their site  for FREE! To learn more about GPSmyCity, click here.
All you have to do is share this article on any social media you want and subscribe to receive our newsletter.

This post was converted into an app and you can get it here.

∗There are two airports in São Paulo: Guarulhos (GRU, the international) and Congonhas (CGH, the domestic one).
∗ Over fifteen companies fly to São Paulo, some of them are: AirFrance, TAP, British Air Ways, Delta, United, Emirates, Aerolíneas Argentinas, KLM and Alitalia.
∗ For domestic flights: Avianca, Latam, Gol and Azul (they also operate internationally).
∗ The main bus terminal, Tietê, provides buses for basically all capitals and big cities in Brazil and also nearby countries.

∗ São has a tropical mild climate and can be visited all year-round. The seasons are not well defined and in general the wheatear is nice and dry and not too hot.
∗ During the winter temperatures range from 55 to 75 F (12 to 23 C).
∗ Summer is the rain season and the weather becomes increasingly hot, with a few flash downpours.

2 thoughts on “São Paulo: the mecca of graffiti art!”