Tenerife is a Spanish island in the Canaries blessed with palm-fringed good looks and paradise credentials. Many choose it as a holiday destination because of its spotless beaches, warm climate and lively resorts, but this volcanic isle has more to offer than the generic delights you’ll find in the window of any travel agent. There are many things to do in Tenerife such as: climb a volcano, hike a heart-stopping gorge, kick up dust on its lunar landscapes, wander through a museum or learn the bird songs of its native warblers, etc. Mother Nature has been generous with her allowance, and surprises are ten a penny…

Majestic Mount Teide (so often pictured wearing a mantle of snow despite the warmth of Tenerife) is the challenge to conquer for adventurous spirits. Encircled by Teide National Park, the rocky terrain reaches over 12,000 feet in height, and is one of the most visited natural wonders in the world. Currently dormant, Teide is, nonetheless, a tricky terrain to scale, so there’s a cable car for those who would prefer to soar over the long hillside hike and take in a bird’s eye view of the surrounding parkland.

Go wild at the Carnival

If your visit to this magical Canary Island happens to be planned for February, once you land in Tenerife head directly for Santa Cruz, where the world’s second glitziest carnival shimmies into the international spotlight. Celebrated annually, this giant themed shindig has, in the past, been centred on everything from Magic to the Roaring Twenties. In 2015, you’d better polish your moon boots: Space is the unifying theme.

Soak up some history in La Laguna

Historic San Cristobal de la Laguna is Tenerife’s second largest city, but in terms of cultural significance, it is without rival on the island. Pretty wooden facades line the streets, impeccable churches ring out the hours in its UNESCO recognized old town, and in the background, the Anaga Mountains tower. While the 16th, 17th and 18th century buildings are undoubtedly the star attractions, the city abounds with museums, and its university means it has a thriving student population. 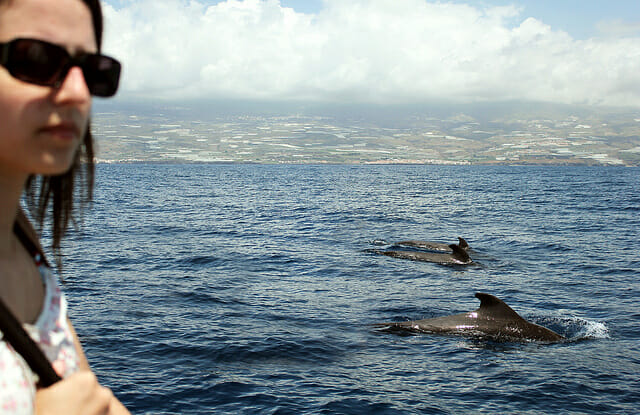 Skim out over the sea surrounding the island, and you might be surprised to discover that it’s teeming with 28 species of dolphins, pilot whales and other sub-aquatic critters. A boat trip to see dolphins in their natural habitat is far more rewarding than in an aquarium, and sightings are almost guaranteed. However, even if you don’t get lucky, it could never be a failed journey; the backdrop of the Los Gigantes cliffs alone is dramatic enough to guarantee a jaw-dropping excursion.

Don’t neglect to try the Tenerife food and look beyond the pages of the resort brochures when you book your holiday to Tenerife. True; it’s the perfect spot to kick back, relax, and let go of your troubles, but the beauty and the culture should be incentive enough to get off your sun lounger and make the new discoveries that will define your visit.